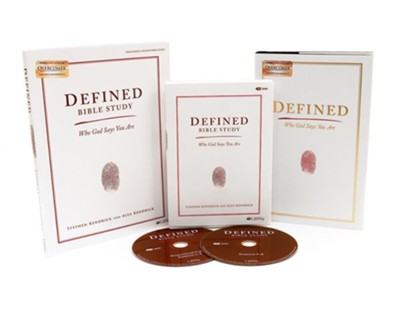 Defined: Who God Says You Are, DVD Leader Kit

Defined: Who God Says You Are is the Kendrick brothers' new 8-session video Bible study based on their new movie, OVERCOMER. This new Bible Study is about finding your identity in God. Before asking, who am I?, you need to be able to answer, who is God?.

The problem with our search for identity is that we are looking in all the wrong places. Scripture teaches that we are all made in the image of God. We do not define ourselves - the Creator does. We were all created to be known and loved by God. Once those answers are clear, we can move forward and discover all God has called us to be.

Note: Each group participant will need a copy of the Defined Bible Study Book

Stephen Kendrick is a cowriter and producer for Sherwood Pictures. He also works with Provident Films, developing marketing and Bible-study resources for churches in conjunction with Sherwood movies. Their first movie, Facing the Giants, played in more than one thousand theaters after its September 2006 release and grossed more than ten million dollars in box-office receipts. Facing the Giants DVD was later released in 14 languages, in 56 countries, and on every continent. More than 6,500 churches have used the movie for ministry and community outreach.

Defined Leader Kit includes a Bible Study Book, two DVDs with 18 to 26-minute video sessions, and the Defined trade book. The videos include a promotional segment and teaching sessions featuring authors Stephen and Alex Kendrick and other contributors. The Kit also includes codes for access to digital video downloads and additional resources from Wordsearch Bible.

When you introduce yourself to someone for the first time, you have an opportunity to define yourself. You disclose your name, profession, and interests. These factors help our culture define us, but are those answers enough? People are struggling in ten thousand ways because of identity issues. They can’t help but ask, who am I? and why do I matter? Can our culture really provide meaningful answers to those questions, or do we need something deeper and more significant?

Before asking, who am I? we need to be able to answer, who is God? If we can’t answer the first question, we will never answer the second. The problem with our search for identity is that we are looking in all the wrong places. Scripture teaches that we are all made in the image of God. We do not define ourselves—the Creator does. We were all created to be known and loved by God. Once those answers are clear, we can move forward and discover all God has called us to be.

Session topics:
1. Created by God
2. Broken by Sin
3. Transformed by the Gospel
4. Who We Are in Christ
5. What We Have in Christ
6. Living Out Our Identity
7. Walking in the Spirit
8. Walking on Mission

▼▲
I'm the author/artist and I want to review Defined: Who God Says You Are, DVD Leader Kit.
Back
Back