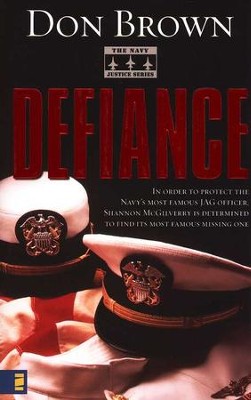 ▼▲
From a murder in Paris to a courtroom in California to aterrorist camp in the Gobi Desert, Don Brown's follow-upto Treason and Hostage plunges intoa suspense-filled journey of danger, duty, and hope. The Commander's Bodyguard is Shannon McGilverry,a crack NCIS agent assigned to protect Navy JAGOfficer Zack Brewer. Zack is being hunted by terrorists,stalked by a psychopath, and is working his way througha perilous, politically-charged trial. When another NavyJAG officer is murdered, it's clear that Zack is in harm's way. As his bodyguard, Shannon must do more than protect Zack.She also must set aside her growing feelings for the brilliantattorney and investigate rumors that the love of his life,Diane Colcerninan, may still be alive. Zack finds himselfin need of his faith more than ever as Navy SEALS launcha daring rescue attempt that has the potential to triggerWorld War III.

From a murder in Paris to a courtroom in California to a terrorist camp in the Gobi Desert, Don Brown’s follow-up to Treason and Hostage plunges into a suspense-filled journey of danger, duty, and hope. The Commander’s Bodyguard is Shannon McGilverry, a crack NCIS agent assigned to protect Navy JAG Officer Zack Brewer. Zack is being hunted by terrorists, stalked by a psychopath, and is working his way through a perilous, politically-charged trial. When another Navy JAG officer is murdered, it’s clear that Zack is in harm’s way. As his bodyguard, Shannon must do more than protect Zack. She also must set aside her growing feelings for the brilliant attorney and investigate rumors that the love of his life, Diane Colcerninan, may still be alive. Zack finds himself in need of his faith more than ever as Navy SEALS launch a daring rescue attempt that has the potential to trigger World War III.

▼▲
In the Gobi Desert, a red-headed woman, Diane Colcernian, is dragged from a tent by laughing terrorists, who force her to knees with her head on a chopping block. Then they relent. They promise her that it won't be today, but soon.
In Paris, attorney Jeanette L'Enfant smiles as she answers the phone, expecting to hear from the man she plans to marry, Jean-Claude la Trec. Instead she hears terrorists demanding that he tell them where she is. Then she hears him murdered. She flees with the terrorists close behind.
In Hawaii, Lieutenant Commander Zack Brewer, America's most famous JAG lawyer receives a recall to San Diego. His life is in danger in part because he's tried two internationally acclaimed cases dealing with terrorists, and in part because he's so drop-dead handsome that women swoon over him and his pictures have become common in the gossip tabloids, much to his chagrin. The swooning women include the NCIS agent detailed to protect him, Shannon McGillvery.
Assigned to a case to try a SEAL who made a homosexual assault on other SEALs aboard a submarine, Zack becomes the target, perhaps literally, for the presidential candidate, Eleanor Claxton. She leaps forward to defend the SEAL in public in order to boost her poll ratings in San Francisco.
After Zack advises the defendants' newly graduated JAG lawyer, she asks to meet with him following Claxton's meeting with the SEAL. However, the meeting never takes place because Zack finds her dead at their meeting place. And Shannon fears that Zack may be next.
As she follows leads, Shannon discovers that Diane may still be alive, but how can she convince the brass to believe the evidence? How can they find Diane, and what price will her love for Zack lead Shannon to pay?
A former JAG officer, Don Brown has written an exciting third story for The Navy Justice Series. Except for Zack's being so outrageously handsome, the characters feel authentic. The plot moves along rapidly. Brown displays a good knowledge of international tensions, alliances, and undercurrents. Eleanor Claxton bears a striking resemblance in personality to an actual candidate running for president, adding to the sense of authenticity. With its combination of action and romance, men and women should both be able to enjoy this story.
Brown has left some plot threads dangling, so we may hope to read another in this series soon.  Debbie W. Wilson, Christian Book Previews.com

▼▲
I'm the author/artist and I want to review Defiance, Naval Justice Series #3.
Back
×
Back
×