Skip to main content
OUR BIGGEST BARGAIN SALE EVER: Over 6,000 deals at never-seen-before prices ~ through 8/23. Shop now >
Defending First-Century Faith: Christian Witness in the New Testament - eBook
By: F.F. Bruce
Stock No: WW97426EB 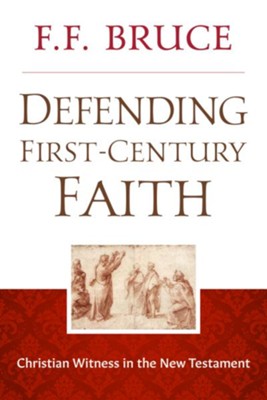 ▼▲
What is the gospel? And how was it first preached--and defended? Opposition of many kinds--religious, political, and cultural--met the early Christians in their eagerness to tell the world about Jesus Christ. The kinds of opposition they faced still exist in new guises and we can learn much from the sensitive way the apostles tackled them. While adapting their approach, the early Christians never watered down their message. The Kingdom of God calls loudly for such men and women today, writes the author. Defending First-Century Faith is clear, concise, and deeply perceptive. Factual, fresh and inspiring . . . by the most outstanding evangelical scholar in Britain. The Christian Herald

▼▲
I'm the author/artist and I want to review Defending First-Century Faith: Christian Witness in the New Testament - eBook.
Back
Back