EARLY CHRISTMAS SALE: Shop over 900 items up to 85% off through 9/29 >
Defeating Darwinism by Opening Minds (Paperback)
By: Phillip E. Johnson 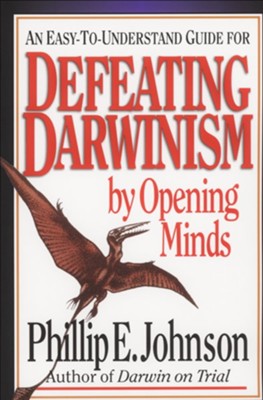 ▼▲
What's the best way to discern and defeat the false claims of Darwinism? By developing solid critical-thinking skills, says Johnson. His non-technical discussion of Darwinism versus creationism gives you sound advice on spotting deceptive arguments, grasping scientific issues, understanding the impact of the Scopes trial, and more. Ideal for high school students, teachers, pastors, or anyone concerned about the creation-evolution debate. 132 pages, softcover from InterVarsity.

▼▲
For decades, Christians have felt voiceless in the critical debate over evolution. Until now. Finally, ordinary Christians have the opportunity and the resources to defeat the false claims of Darwinism. With all of the complicated scientific debate swirling around the topic of evolution, Christians need an easy way to understand the basic issues without oversimplifying. Phillip Johnson has the answer: the key to defeating the false claims of Darwinism is to open our minds to good thinking habits. Here is first-rate advice on avoiding common mistakes in discussions about evolution, understanding the legacy of the Scopes trial, spotting deceptive arguments, and grasping the basic scientific issues without getting bogged down in unnecessary details. In the bestselling and critically acclaimed Darwin on Trial and Reason in the Balance, Phillip Johnson took on the academic elites and exposed the misleading claims of evolutionary naturalism. Defeating Darwinism by Opening Minds provides a new and powerful treatment of these issues for high-school students, parents, teachers, pastors, youth advisors and ordinary readers. Johnson aims not just to defeat a bad theory, but to defeat it in the right way-by opening minds to the truth.

▼▲
Phillip E. Johnson taught law for more than thirty years at the University of California--Berkeley where he is professor emeritus. He is recognized as a leading spokesman for the intelligent design movement, and is the author of many books, including and

▼▲
"By profaning the scientific establishment's most sacred cows, U.C.-Berkeley law professor Johnson has earned critical acclaim and brisk sales. Now, the witty iconoclast who questioned the scientific evidence for Darwinian evolution in his Darwin on Trial (1991) provides a short, simple manual to help students, parents, teachers and pastors debate evolution, 'a subject,' Johnson says, 'that has for too long been protected from critical thinking by law and academic custom.' Included in the book are tips for using what Carl Sagan once called a 'baloney detector kit' to verify the evidence used by opponents in an argument, as well as tips for detecting ad hominem and straw man arguments. Johnson's greatest contribution, however, is that he helps non-scientists distinguish between scientific fact, like microevolution within species, and unproved scientific theories, like macroevolution, which claims that molecules became men. He is also adept at exposing philosophical bias behind ostensibly 'objective' scientific arguments. With measured prose and systematic thinking, Johnson uses his legal expertise to demonstrate the ways in which arguments about evolutionary theory may be conducted."
"Johnson feels his successful antievolution books, Darwin on Trial (1991) and Reason in the Balance (1995), are more complicated than parents and teachers need to prepare students to take on the evolutionists. Hence, this shorter version of his overall thesis that also advises how to debate evolution. Johnson first makes clear what he perceives the real adversary to be: a dogma that insists life arose solely by chance and that denies contrary evidence a hearing. He then counsels believers to avoid such common mistakes as retreating from theism to deism (and so transforming a continuously creative God into an uninvolved First Cause), to learn to spot faulty analogies and other forms of poor logic, to know the soundest scientific data casting doubt on classical evolution, and to persist--for, he says, the days of Darwinian hegemony are numbered. He firmly believes and seeks to persuade readers that his ultimate causes, aside from religious faith, are freedom of inquiry and the opening of now closed minds."

▼▲
I'm the author/artist and I want to review Defeating Darwinism by Opening Minds (Paperback).
Back
×
Back
×