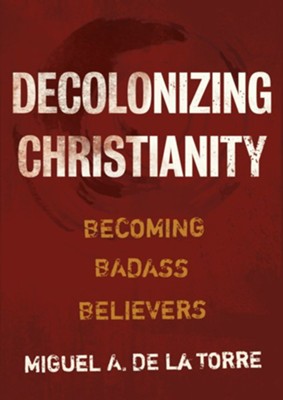 Echoing James Cone’s 1970 assertion that white Christianity is a satanic heresy, Miguel De La Torre argues that whiteness has desecrated the message of Jesus. In a scathing indictment, he describes how white American Christians have aligned themselves with the oppressors who subjugate the "least of these"—those who have been systemically marginalized because of their race, ethnicity, and socioeconomic status—and, in overwhelming numbers, elected and supported an antichrist as president who has brought the bigotry ingrained in American society out into the open.

With this follow-up to his earlier Burying White Privilege, De La Torre prophetically outlines how we need to decolonize Christianity and reclaim its revolutionary, badass message. Timid white liberalism is not the answer for De La Torre—only another form of complicity. Working from the parable of the sheep and the goats in the Gospel of Matthew, he calls for unapologetic solidarity with the sheep and an unequivocal rejection of the false, idolatrous Christianity of whiteness.

▼▲
Miguel A. De La Torre is professor of social ethics and Latinx studies at the Iliff School of Theology in Denver. Awarded the 2020 Excellence in Teaching Award by the American Academy of Religion, he has published over thirty-five books, including Burying White Privilege: Resurrecting a Badass Christianity and Reading the Bible from the Margins.

▼▲
"Miguel De La Torre has long been one of the premier social ethicists in the world, seeking to offer a radical, no-holds-barred reconceptualization of Christianity that supports the most marginalized and oppressed. In Decolonizing Christianity, De La Torre continues in his bold and prophetic attempt to rid Christianity and the church in the US of the bad habits accrued by several centuries of brutal colonialism and racism. This text is a must-read, written by one of the most badass theologians on the planet!"
— Anthony G. Reddie
editor of Black Theology: An International Journal

"The church in America will be recovering from the Trump presidency for many years to come, and De La Torre puts his finger squarely on the problem from a sociological and theological standpoint. The Trump regime buttressed ’white Christianity,’ the insidious worldview that embraces racial supremacy and believes in the manifest destiny of white bodies to occupy the highest echelons of power, profits, and privilege."
— Robert Chao Romero
author of Brown Church: Five Centuries of Latina/o Social Justice, Theology, and Identity

"Miguel De La Torre’s Decolonizing Christianity is a tour de force. Colonization is not only a takeover of nations but an active takeover of knowledge. Challenging the colonizing theology of racialized nationalism, De La Torre courageously calls us to follow Christ toward actual freedom."
— Peter Goodwin Heltzel
author of Jesus and Justice: Evangelicals, Race, and American Politics

▼▲
I'm the author/artist and I want to review Decolonizing Christianity: Becoming Badass Believers.
Back