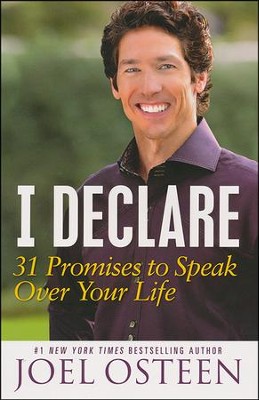 I Declare: 31 Promises to Speak Over Your Life

▼▲
From the chart-topping author of Your Best Life Now comes a stirring collection of 31 devotions to help you understand the power of the spoken word. Each day opens with a faith-building declaration followed by Scripture and a story that demonstrates the mighty ability of God. Learn to "speak favor over your future"! 192 pages, softcover from Faithwords.

▼▲
Embrace God's blessings every morning and experience the glory of His promises with thirty-one powerful Scripture lessons based on a regular, favorite feature of Joel Osteen's sermons at Lakewood Church.
Broken into thirty-one segments, this book defines the most powerful blessings in Scripture and encourages readers to declare one each day for a month. The declarations will affirm God's blessings in the area of health, family legacy, decisions, finances, thoughts, outlook, and overcoming obstacles.

▼▲
Joel Osteen is the senior pastor of Lakewood Church in Houston, Texas. More than ten million viewers watch his weekly televised services each week in the United States, and millions more in 100 nations around the world. He can also be heard twenty-four hours a day on Joel Osteen Radio SiriusXM channel 128. He is the author of eleven national bestselling books and has been named by numerous publications as one of the most influential Christian leaders in the world. He resides in Houston with his wife, Victoria. You can visit his website at http://www.joelosteen.com.

▼▲
I'm the author/artist and I want to review I Declare: 31 Promises to Speak Over Your Life.
Back
×
Back
×