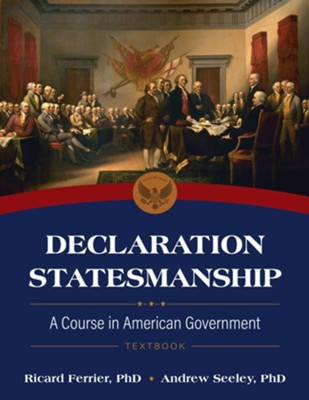 ▼▲
Declaration of Statesmanship is a one-of-a-kind American Government high school course. It unites history, philosophy, and civics in a dynamic blend of narrative and argument. The authors of the course continually endeavor to match the thoughtfulness and elegance of the multiplicity of original sources and fundamental texts found in this course which were pivotal in the founding of the nation.

The course has three primary parts. In the first, the text explores the ideals and principles of this nation as expressed in The Declaration of Independence. It examines the philosophy and religious teaching that influenced the founders in their decision to write the Declaration and leave Great Britain. Then the text considers the Declaration in detail and shows how The Articles of Confederation and The Constitution establish a government which fulfills the Declaration’s ideals.

The second part of the course investigates how some of our greatest statesman were guided by these same ideals when dealing with the difficult questions of slavery and civil rights. From even before the founding there was a conflict between the ideas of liberty and the existence of slavery. This part of the course reviews how the founding generation addressed the problem of slavery present in the new nation and how future statement have used those same ideals in their struggles.

America needs great statesmen, but it has an even greater need, a need of people capable of living as free men. In the third part, the course uses Alexis de Tocqueville's Democracy in America to analyzes the peculiarities of America which allowed this experiment in democracy to be so successful, and what is needed to maintain the freedom and self-rule which we have inherited.

Declaration of Statesmanship has been designed as a one semester course in American Government for high school students. The program is made up of 4 different components which give students everything they need. The components are a Coursebook, a Reading Book, a Teacher’s Manual, and a Video Lecture Series.

Coursebook: The Coursebook contains the course text, as well as chapter questions, quizzes and course tests.

Reading Book: The Reading Book contains the bulk of the original writings and documents which accompany the course.

Video Lectures: The 14 part Video Lecture Series of 30 minute lectures accompanies the coursebook chapters. These classroom style lectures dig into the original texts and documents from the course providing additional insights and expounding upon important points and themes.

This course is the perfect tool to inform future generations of their rights, duties and responsibilities as American citizens living in the civic state that is the American Government.

▼▲
I'm the author/artist and I want to review Declaration Statesmanship: A Course in American Government Course Book.
Back