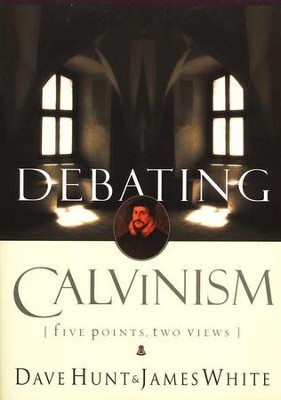 ▼▲
A centuries-old belief system is put to the test as two prominent authors examine the validity of Calvinism. White takes the point position; Hunt, the counterpoint. The familiar debate format features affirmative and denial statements concerning the Reformer's teachings on God's sovereignty and man's free will; followed by response, defense, and final remarks from the principals. Lively! 450 pages, softcover from Multnomah.

▼▲
In this thought-provoking, challenging book, two articulate debaters examine the subject of Calvinism from opposing viewpoints.

Dave Hunt is an internationally-known author and lecturer. His bestselling books have been translated into more than forty languages and have sold more than 4 million copies. Mr. Hunt co-hosts his own weekly radio program Search the Scriptures Daily which is broadcast to over 100 stations in the US and worldwide. He and his wife, Ruth, have four children and live in central Oregon.

James White is the director of Alpha and Omega Ministries, which is dedicated to defending the historic Protestant position on the sufficiency of Scripture and Salvation. The author of Letters to a Mormon Elder and The King James Only Controversy, and the coauthor of The Same Sex Controversy, White and his wife, Kelli, have two children and live in Phoenix, AZ.

▼▲
Debating Calvinism by Dave Hunt and James White is one of the latest contributions to a growing number of books exploring the differences between Calvinist and Arminian theology. For Hunt and White, this book represents the culmination of several years of repartee in print, on radio and in person. White wrote The Potters Freedom in 2000 as a reaction to a book by Norm Geisler, Chosen But Free. Hunts book, What Love Is This? followed in 2002 as a response to The Potters Freedom. Other authors have also weighed in on the subject in the past year, and of course, one doesnt need to look too far to find that this topic has generated volumes through the centuries.
The book is formatted in the style of an oral debate, with a chapter each of affirmation, response, defense and final remarks. The points covered are basically those of the five points of Calvinisms TULIP: total depravity, unconditional election, limited atonement, irresistible grace, and perseverance of the saints. Some readers may find this style a bit difficult to follow; I frequently had to flip back and forth between chapters to see for myself exactly which quote or point was being referenced, but this was not too troubling.
I found James Whites material to be consistently thoughtful; his tone was generally gracious, but he dealt with the topics in an even, measured fashion, and his arguments were cohesive. Dave Hunts tone struck me as abrasive and sarcastic from the opening paragraph. His tone was erratic; at times he was able to make his point clearly, with unemotional, sequential argumentation. But this was not the norm. In places it seems as though he is deliberately trying to miss the point, nowhere more so than in the discussion of assurance and eternal security in chapter fourteen. I was also disturbed by his assertions that those who hold to Calvinist views of election are unconcerned for the lost. He has only to read the works of the men he accuses  Piper, MacArthur, Pink, Sproul, Spurgeon and White -- to be ashamed of such a claim.
Because of the repeated charges of misquotation and misrepresentation (leveled by both authors), a careful reader would almost wish to have every reference source cited at hand. I have read many of the books mentioned, and tried to go back to each quote for context, but gave up due to time constraints. A complete bibliography and Scripture reference guide at the end of the book would be a huge bonus. For anyone wanting to seriously consider the debate over Calvinism, this book will not be the final word, but an excellent starting place for further study.  Pam Glass, Christian Book Previews.com

▼▲
I'm the author/artist and I want to review Debating Calvinism: Five Points, Two Views.
Back
×
Back
×