The Death of the Messiah: From Gethsemane to the Grave, Volume 1
By: Raymond E. Brown 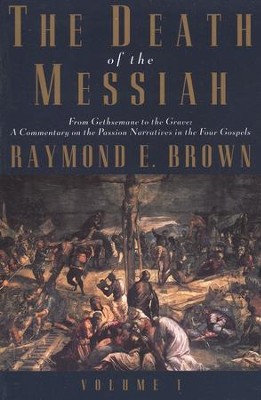 The Death of the Messiah: From Gethsemane to the Grave, Volume 1

▼▲
In this monumental work, the late Raymond Brown explicated the Gospel narratives of Christ's passion and death, connecting each to its Old Testament antecedents, its function in the first-century church, and its place in current thought. This study also includes analysis of Old Testament traditions, comparative studies of the Gospels, literal translations of selected passages, extensive notes and commentary, and an extensive bibliography. A skilled, in-depth follow-up to his earlier work on the life of Christ, The Birth of the Messiah.

Over his illustrious career, Raymond E. Brown, S.S., Ph.D., was internationally regarded as a dean of New Testament scholars. He was Auburn Distinguished Professor Emeritus of Biblical Studies at Union Theological Seminary in New York City, received over thirty honorary degrees from Catholic and Protestant universities worldwide, and was elected a (Corresponding) Fellow of the British Academy and a member of the American Academy of Arts and Sciences. In addition to serving as president of the Society of Biblical Literature, the Catholic Biblical Association, and the Society of New Testament Studies, two popes appointed Father Brown as the sole American on the Pontifical Biblical Commission. Some of the best known of his more than thirty-five books on the Bible are three volumes in the Anchor Bible series on the Gospel and Epistles of John, as well as the Anchor Bible Reference Library volumes The Birth of the Messiah, The Death of the Messiah, and An Introduction to the New Testament, winner of the 1998 Catholic Press Association Award for Biblical Studies. Father Brown’s untimely death on August 8, 1998, saddened all who knew him.

▼▲
"Father Raymond Brown has a strong claim to be the most distinguished of American New Testament scholars, and he has few competitors worldwide."—The New York Times
"A stunning array of fresh insights into how the passion stories came into being and what—scene by scene—the four Evangelists really say about the arrest and crucifixion of Jesus."—Newsweek
"The Death of the Messiah is first of all a scholarly work, but it is also enjoyably readable and accessible to the interested layman."—Newsday
"Breathtaking! Raymond E. Brown's The Death of the Messiah crowns two millennia of Christian scholarship pondering the 'scandal of the crucifixion.' Brown has once again demonstrated his position as Father, Rabbi and teacher to us all."—Burton L. Visotzky, Jewish Theological Seminary of America
"The supreme achievement of a deeply pastoral scholar."—Sandra M. Schneiders, Jesuit School of Theology and Graduate Theological Union
"The benchmark by which any future study of the Passion Narratives will be measured."—John P. Meier, University of Notre Dame
"These volumes are a treasure that spans the ages."—Phyllis Trible, Wake Forest University Divinity School

▼▲
I'm the author/artist and I want to review The Death of the Messiah: From Gethsemane to the Grave, Volume 1.
Back
×
Back
×