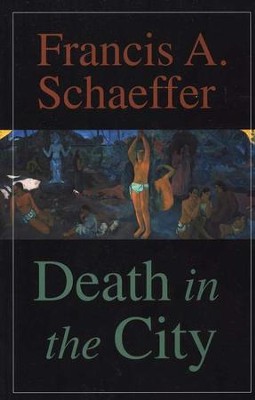 Death in the City

▼▲
Francis Schaeffer parallels the decline of contemporary culture with studies in Jeremiah and Romans to show the link between the intellectual and spiritual orientation of a society--and to show that ideas do have consequences. This classic work helps Christians critically appraise the direction of our culture as it distances itself from its biblical moorings so that they may swim against the intellectual and practical tides that offer only moral death. A good introduction to Schaeffer's works, this edition uses the definitive text of the book as edited by Schaeffer shortly before his death. Schaeffer's son-in-law, Udo Middlemann, provides an introduction discussing the ongoing significance of Schaeffer's insights.

Schaeffer helps us appraise the direction of our culture as it distances itself from its biblical moorings. With penetrating insight, Schaeffer equips Christians to swim against the intellectual tides that lead to moral death.

Francis A. Schaeffer (1912–1984) authored more than twenty books, which have been translated into several languages and have sold millions globally. He and his wife, Edith, founded the L'Abri Fellowship international study and discipleship centers. Recognized internationally for his work in Christianity and culture, Schaeffer passed away in 1984 but his influence and legacy continue worldwide.

Udo W. Middelmann is president of the Francis A. Schaeffer Foundation. He is a graduate of Covenant Theological Seminary and a longtime worker at Swiss L'Abri. Udo and Debbie Middelmann have five children and three grandchildren.

▼▲
I'm the author/artist and I want to review Death in the City.
Back
×
Back
×