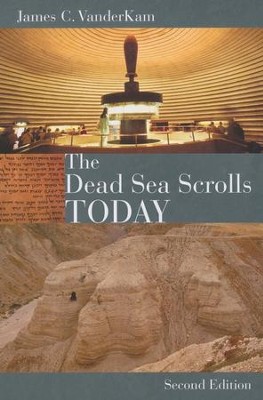 ▼▲
Heralded as the greatest manuscript find in modern times, the discovery of the Dead Sea Scrolls by a Bedouin shepherd boy in 1947 has prompted as much scholarly debate as excitement.In the last few years much has happened in connection with the Dead Sea Scrolls.

International controversy has erupted over the lack of access to the unpublished scrolls, while a renewed effort has been made to finish the large task of editing the remaining texts from the fourth cave-the richest repository of writings-in which 15,000 fragments have been found representing more than 500 texts. These events have unleashed a flurry of discussion and new theories about the scrolls.

In The Dead Sea Scrolls Today, 2nd ed. preeminent scroll researcher James C. VanderKam offers an up-to-date guide to all the scrolls-published and still unpublished-discussing what they tell us about the community associated with them and what importance they hold for biblical studies. The original edition was voted best popular book in Biblical Archeaology in 1995, and Vanderkam continues that excellance by updating information and research on the Scrolls to 2009.

The book's chapters cover in scrupulous fashion the major subjects of scroll studies: the discoveries of the manuscripts and nearby archaeological remains during the 1940s and 1950s and the methods used to date the scrolls and ruins; the content and character of the texts themselves; the identity, history, and beliefs of the people who lived in the area of Qumran and collected, wrote, and copied scrolls; and the contributions the scrolls have made to the study of the Old and New Testaments.

Main features of the book include the following:

▼▲
Best-selling book on the Scrolls, updated to reflect current scholarship and recent debates

While retaining the format, style, and aims of the first edition, the second edition of The Dead Sea Scrolls Today takes into account the full publication of the texts from the caves and the post-1994 debates about the Qumran site, and it contains an additional section regarding information that the Scrolls provide about Second Temple Judaism and the groups prominent at the time. Further, VanderKam has enlarged the bibliographies throughout and changed the phrasing in many places. Finally, quotations of the Scrolls are from the fifth edition of Geza Vermes's translation, The Complete Dead Sea Scrolls in English (Penguin, 1997).

▼▲
James C. VanderKam is the John A. O'Brien Professor of Hebrew Scriptures Emeritus at the University of Notre Dame. Among his many other books are The Dead Sea Scrolls and the Bible, The Dead Sea Scrolls Today, and the two-volume commentary on the book of Jubilees in the Hermeneia series. He also served as an editor for thirteen volumes in the Discoveries in the Judaean Desert series and was editor of the Journal of Biblical Literature from 2006 to 2012.

From reviews of the first edition


"This is the book for those interested in a sober, careful, and well-written account of the discovery of the Scrolls, their meaning, and the current state of research on them. A well-organized and highly readable account."

Hebrew Studies
"An attractive book, easy to read, and with excellent photographs. VanderKam has rendered a much-needed service to the Dead Sea Scrolls by presenting such a thoughtful, well-reasoned, and balanced treatment."

Church & Synagogue Libraries
"This is the book congregational libraries need to help readers put in perspective much that has come about as a result of the discovery of the Scrolls a half century ago."

Journal of Biblical Literature
"Among the many books on the Dead Sea Scrolls, this one can be recommended as the best popular recitation of the history of the sites, of the texts, and of the scholarly process."

▼▲
I'm the author/artist and I want to review The Dead Sea Scrolls Today, Revised Edition.
Back
Back