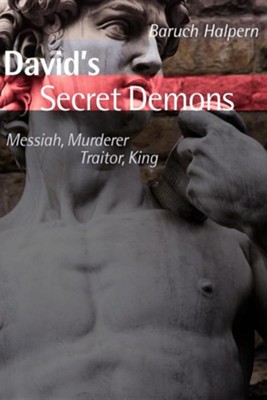 The Bible portrays King David as an exceptional man and a paragon of godly devotion. But was he? Some scholars deny that he existed at all. Did he? This challenging book examines the written and archaeological evidence critically in an effort to paint an accurate picture of one of the Bible's central figures.

Neither defending nor rejecting the traditions about David, Baruch Halpern, a leading scholar of biblical history and the ancient Near East, traces the origins of development of David's persona. Because the biblical text clearly responds to concerns that can only be contemporary with David himself, we can believe that David was both real and a central actor in the historical drama of ancient Israel. Yet at the same time, the written record also shows that contemporaries understood David's character to be much more unsavory trhan the tradition has hitherto allowed.

Halpern digs beneath the layers of tradition to understand David as an individual, as a person. The man he uncovers turns out to have been complex, ambiguous, and — above all — surprising. According to Halpern, the image of David grew over time. He was the founder of the dynasty that perpetuated the texts about him, and they progressively exaggerated his accomplishments. But in the earliest writings David remains a modest figure, as this book shows for the first time. To understand David as a human being, one must keep in mind that he was primarily a politicians who operated in a rough-and-tumble environment in which competitors were ready literally to slit throats.

Halpern's work raises many provocative questions: Was David an Israelite or a Philistine? Was Solomon really David's son? Did David take the throne of Israel by the consent or against the will of the people? How many murders did he commit on his way to the crown? Indeed, was David someone it would have been wise to even invite to dinner?

The challenging arguments in David's Secret Demons are sure to provoke all kinds of discussion among biblical scholars and general readers alike. In addition — a big bonus — Halpern's accessible, at times humorous prose will itself draw readers everywhere into the compelling story of David found between these covers.

▼▲
Baruch Halpern is Covenant Foundation Professor of Jewish Studies at the University of Georgia and former codirector of the Megiddo Expedition. His other books include The Constitution of the Monarchy in Israel, The Emergence of Israel in Canaan, The First Historians: The Hebrew Bible and History, and Law and Ideology in Monarchic Israel.

▼▲
Publishers Weekly — Starred Review
"In a dazzling display of erudition, Halpern dissects the story of David with sparkling, witty prose, using historical, textual, psychological, and archaeological analysis. Conventional perceptions of David fault him for his affair with Bathsheba and for arranging the death of her husband, but generally portray him as a handsome, brave shepherd who became king and established Jerusalem as Israel's capital. Halpern elaborates and exploits the story of Bathsheba to paint David as a villain. He methodically demolishes any positive image of David, calling him a serial killer, thug, mercenary, adulterer, assassin, bandit, brigand, and predator. . . An outstanding study. "

Jonathan Kirsch in The Los Angeles Times
"For any reader who is troubled by the notion that the Bible might not be historically accurate or complete, there is both good news and bad news in David's Secret Demons. . . Its author, co-director of the archeological excavations at Megiddo, where the Bible says the battle of Armageddon will occur, is among the most accomplished and distinguished scholars of his generation, or any generation. As both a biblical historian and a working archeologist, he brings an unrivaled depth of scholarship to his work. . . David's Secret Demons is an intellectual tour de force that gathers all the strands of technical Bible scholarship and ties them to the figure of David as he has been recalled and celebrated in the whole sweep of Western civilization. Along the way, Halpern displays an inventiveness and even a playfulness that is rare in Bible scholarship. "

Theological Studies
"This study shows not only that skeptical minimalism and credulous biblicism are not only options in the current debate about ancient Israel, but also that there is a future for biblical texts in the reconstruction of history, when they are read in the light of other ancient historical documents. . . Halpern has set a standard in the critical use of both biblical and nonbiblical sources that his own critics will find hard to match. This is the most promising exercise in biblical historiography to appear in many years."

Journal of Biblical Literature
"Halpern has given us a new standard for the twenty-first century, and this book will become the starting point for continuing scholarly discussion on the life of David. It is a new benchmark, and even those who are skeptical about the historicity of David and about the value of the biblical account of David must engage and refute Halpern's arguments in detail if they wish to be taken seriously in the discussion. The book is erudite, thorough, well-written, and a must-read for anyone interested in David's life and the Bible's account of it."

Old Testament Essays
"This eminently readable book arrives at the conclusion that 'you certainly would not be happy to discover [David] was marrying your daughter.' For all its humorous touches and analogies with contemporary events, this is, however, a very erudite and thought-provoking text, which proves beyond any doubt that scholarship does not have to be boring. . . Halpern's book is accessible, intellectually satisfying and beautifully written. . . The text is both informative and wit-sharpening. This book will edify both the interested layperson and the Biblical scholar."

Library Journal
"A scholarly, fascinating, and controversial study of the figure of David in the Hebrew Scriptures. . . Sure to receive much scholarly attention. Halpern's work can be profitably read by lay persons and scholars alike. Recommended for both public and academic libraries."

Richard Ostling in the The Associated Press
"Halpern seeks to rescue the David of history by belittling him. Halpern provides a vigorous historical case in favor of David's existence. . . His interpretation of the Scriptures is skeptical, even cynical. He sees the biblical history as political 'propaganda,' so we should read between the lines to surmise what the writers omitted. On that basis, he proposes, we know David existed because the biblical writers were at such pains to explain all-too-convenient deaths and dismiss other accusations that must have been leveled against David. If no King David ever existed there would never have been any need for such exertions, Halpern reckons. He sees the David portrayed in the books of Samuel as a sanitized man who never existed, but thinks a more rapacious and problematic ruler did."

Israel Finkelstein
"A sophisticated, engaging biography of David. The 'messiah/king' confronted Goliath and stars in the windows of Gothic churches and in Michelangelo's art. But the 'murderer/traitor'? Brilliantly navigating between the dynasty's apologetic portrait and the early defense of David against the accusations of his foes, Baruch Halpern peels off the story layer by layer. He exploits all the pertinent materials and disciplines: biblical literature, extrabiblical Near Eastern sources, and archaeology. Against those who question David's existence, Halpern brings the founder of the Jerusalem dynasty back to life — neither the saintly David nor the anti-David, but simply the human David."

Richard Elliott Friedman
"Everyone is writing about David. Baruch Halpern here not only surpasses all other writers but also shows what it is about David's story that has drawn all those authors to it in the first place. As a literary reader, Halpern is the first to capture the character of David. As a historian, he is the first to explain why the biblical author told David's story the way he did. Why, for example, does the Bible minimize some of David's offenses but then openly criticize him for adultery and murder? Halpern offers the first plausible explanation of this crucial puzzle. This book is brilliant. It is a century more advanced than any other book about David. Halpern's grasp of ancient history writing and his own skill at writing history are extraordinary. He sets a new standard by which all future writing of biblical history must be carried out. . . After reading Halpern you will see David's story as you've never seen it before. "

H.G.M. Williamson
"This book will breathe new life into what has become a sterile debate about the history of King David. Drawing on a much wider range of sources than previously cited in this connection, and with a dazzling display of scholarly erudition mingled with the fruits of his fertile historical imagination, Halpern has produced an analysis and synthesis sure to provoke lively interest and open up the subject of David to wider debate. "

▼▲
I'm the author/artist and I want to review David's Secret Demons: Messiah, Murderer, Traitor, King.
Back
×