Skip to main content
SPRING CYBER EVENT STARTS NOW: And it's a really BIG deal! Up to 88% off through 5/24>
D'Aulaires' Book of Greek Myths
By: Ingri D'Aulaire, Edgar Parin D'Aulaire
Stock No: WW406943 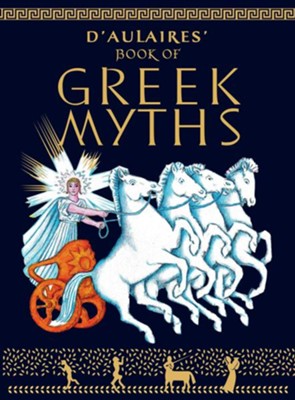 ▼▲
Here are the gods, goddesses, and legendary figures of ancient Greece - mighty Zeus, with his fistful of thunderbolts; gray-eyed Athena, goddess of wisdom; Helios, the sun; greedy King Midas - lavishly depicted by Caldecott winners Ingri and Edgar Parin d'Aulaire. In a relaxed and humorous tone, these splendid artists bring to life the myths that have inspired great European literature and art through the ages, creating a book readers of all ages will cherish.

▼▲
"I doubt I would have grown up to be the writer and artist I became had I not fallen in love with D’Aulaire’s Book of Greek Myths at the age of seven."—R. J. Palacio, author of Wonder.

Now updated with a new cover and an afterword featuring never-before-published drawings from the sketchbook of Ingri and Edgar D'Aulaire, plus an essay about their life and work and photos from the family achive.

In print for over fifty years, D'Aulaires Book of Greek Myths has introduced generations to Greek mythology—and continues to enthrall young readers.

Here are the greats of ancient Greece—gods and goddesses, heroes and monsters—as freshly described in words and pictures as if they were alive today.

No other volume of Greek mythology has inspired as many young readers as this timeless classic. Both adults and children alike will find this book a treasure for years to come.

"For any child fortunate enough to have this generous book . . . the kings and heroes of ancient legend will remain forever matter-of-fact; the pictures interpret the text literally and are full of detail and witty observation."—The Horn Book

"The drawings . . . are excellent and excitingly evocative."—The New York Times

▼▲
INGRI D'AULAIRE and EDGAR PARIN D'AULAIRE first met in Munich, where both were studying art. Ingri had grown up in Norway; Edgar, the son of a noted Italian portrait painter, was born in Switzerland and had lived in Paris and Florence. Shortly after their marriage, they moved to the United States and began to create the picture books that established their reputation as two of the twentieth century’s most important children’s writers and illustrators. They won the Caldecott Medal in 1940 for Abraham Lincoln.

During an extended trip to Greece, they studied and sketched the countryside, the people, and the architecture and artifacts of long ago. The result was D’Aulaires’ Book of Greek Myths, the standard-bearer of mythology for children since its publication in 1962.

▼▲
"For any child fortunate enough to have this generous book . . . the kings and heroes of ancient legend will remain forever matter-of-fact; the pictures interpret the text literally and are full of detail and witty observation."
—The Horn Book

"The drawings . . . are excellent and excitingly evocative."—The New York Times

▼▲
I'm the author/artist and I want to review D'Aulaires' Book of Greek Myths.
Back
Back