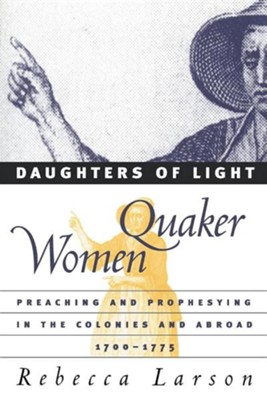 Daughters of Light: Quaker Women Preaching and Prophesying in the Colonies and Abroad, 1700-1775

▼▲
More than a thousand Quaker female ministers were active in the Anglo-American world before the Revolutionary War, when the Society of Friends constituted the colonies' third-largest religious group. Some of these women circulated throughout British North America; others crossed the Atlantic to deliver their inspired messages. In this public role, they preached in courthouses, meeting houses, and private homes, to audiences of men and women, to Quakers and to those of other faiths, to Native Americans and to slaves.

Utilizing the Quakers' rich archival sources, as well as colonial newspapers and diaries, Rebecca Larson reconstructs the activities of these women. She offers striking insights into the ways their public, authoritative role affected the formation of their identities, their families, and their society. Extensively researched and compellingly written, "Daughters of Light" enriches our understanding of religion and women's lives in colonial America.

▼▲
I'm the author/artist and I want to review Daughters of Light: Quaker Women Preaching and Prophesying in the Colonies and Abroad, 1700-1775.
Back