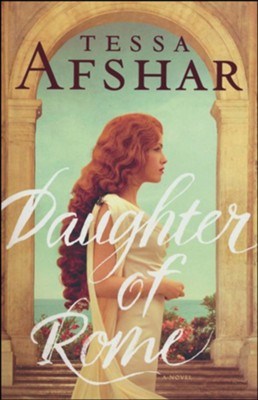 When the daughter of a Roman General meets a disinherited Jewish immigrant, neither one can dream of God's plan to transform them into the most influential couple of the early church. Nor can they anticipate the mountains that will threaten to bury them. Their courtship unwittingly shadowed by murder and betrayal, Priscilla and Aquila slowly work to build a community of believers, while their lives grow increasingly complicated thanks to a shaggy dogm a mysterious runaway, and ruthless foe desperate for love. But when they are banished from their home by an emperor, they must join forces with an unusual rabbi named Paul and fight to turn treachery into redemption.

▼▲
A woman with a devastating secret. A man bent on proving his worth. A chance encounter that catapults them into the heart of history.

When the daughter of a prominent Roman general meets a disinherited Jewish immigrant, neither one can dream of God’s plan to transform them into the most influential couple of the early church. Nor can they anticipate the mountains that will threaten to bury them. Their courtship unwittingly shadowed by murder and betrayal, Priscilla and Aquila slowly work to build a community of believers, while their lives grow increasingly complicated thanks to a shaggy dog, a mysterious runaway, and a ruthless foe desperate for love. But when they’re banished from their home by a capricious emperor, they must join forces with an unusual rabbi named Paul and fight to turn treachery into redemption.

With impeccable research and vivid detail, Daughter of Rome is both an emotive love story and an immersive journey through first-century Rome and Corinth, reminding readers once again why Debbie Macomber has said that “no one brings the Bible to life like Tessa Afshar.”

▼▲
Daughter of Rome is an intricate Christian novel focused on Priscilla and Aquila, following them from their charged first meeting through to their work as Corinthian tent makers.

Little is known about the couple’s early days, but the book suggests a provocative reason for Priscilla’s conversion. Here, she’s the daughter of a Roman general and has long been shunned by her brother. An affair and a miscarriage left her grief-stricken. Later transformed by her belief, Priscilla extends kindness to the needy. Aquila, a disinherited Jewish leather worker, is touched by her actions.

During their early interactions, both Priscilla and Aquila delicately negotiate their emotions. They begin with hesitant humor that morphs into respect and desire, and their love story is engrossing. Further, it’s rooted in the community of believers who guide them. Invigorating scenes build a cross-section of Rome, where people of all stripes find God.

Amid heartening depictions of Christian house churches, the invented characters humanize the biblical ones. Marcus, an eight-year-old runaway whom Priscilla and Aquila shelter, heals Priscilla’s longing for motherhood. The painful reason for his destitution reveals the impact of other people’s sins. An arc on finding justice for Marcus underscores the lengths that Priscilla will go to mirror the love she’s received from God. Antonia, a haughty patrician, enlivens the plot with dark schemes that invite an opening for spiritual grace.

Paul is portrayed with a renegade air that’s steeped in wisdom. Celebrated though he is, he’s integrated with ease, and his characterization is down-to-earth. In this and other ways, Tessa Afshar inhabits the world of early Christians with refreshing clarity. From life under the threat of persecution to domestic details and her characters’ innermost thoughts, she makes early Christianity spark.
Afshar (In the Field of Grace) dramatizes the romance of the biblical characters Aquila and Priscilla in this exciting inspirational. Both Aquila and Priscilla have been betrayed by family members and are seeking to rebuild their lives independently. Each has a stalwart ally: Priscilla has her slave Lollia, while Aquila has his uncle Benyamin. Despite early inclinations to avoid each other, they begin to experience a deep attraction predicated on compassion, sacrifice, and strong faith. After repeated, and mysterious, attempts on Priscilla’s life, Aquila’s protectiveness of Priscilla becomes a desire to permanently guard her, and the two get married. But Priscilla has a secret that changes Aquila’s feelings toward her once he discovers it. Afshar does not end the story with their wedding, but continues with a creative spin on their early ministry, including involvement with an orphaned boy and an order of exile from Claudius. Afshar brings in a thoughtful consideration of whether or not there are behaviors that cannot ever be forgiven, and her intricate biblical setting will engross readers. This is Afshar’s strongest, most complex scripture-based story yet.

▼▲
I'm the author/artist and I want to review Daughter of Rome, softcover.
Back
Back