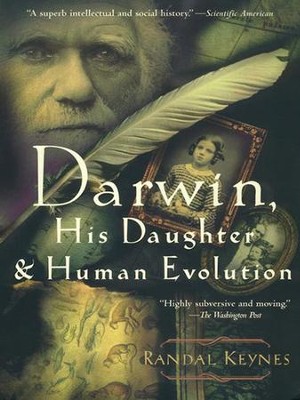 ▼▲
In a chest of drawers bequeathed by his grandmother, author Randal Keynes discovered the writing case of Charles Darwin's beloved daughter Annie, who died at the age of ten. In it were the notes Darwin kept through Annie's illness. Together with his deeply moving memorial of her, they provide a key to provocative new insights into Darwin's views on nature, evolution, and the human condition.

▼▲
In a chest of drawers bequeathed by his grandmother, author Randal Keynes discovered the writing case of Charles and Emma Darwin’s beloved daughter Annie Darwin, who died at the age of ten. He also found the notes Darwin kept throughout Annie's illness, the eulogy he delivered at her funeral—and provocative new insights into Darwin’s views on nature, evolution, and the human condition. In Darwin, His Daughter & Human Evolution, Keynes shows that Darwin was not "a cold intellect with no place for love in his famous 'struggle for existence,' [but]...a man of uncommon warmth" (Scientific American).

Creation: The True Story of Charles Darwin is now a major motion picture and the movie tie-in paperback is also available from Riverhead Books.

▼▲
Randal Keynes is a British conservationist and a great-great-grandson of Charles Darwin. He is also a descendant of the economist John Maynard Keynes.

“Skillfully tells the inspiring story of a man whose heart and mind were equally prodigious.”—The Washington Post

“Keynes shows elegantly and convincingly how Darwin’s mature theory grew out of his intensely personal pain…A poignant reminder of the shaping presence of personal recollection, memory, and loss in the intellectual as well as emotional life of a figure even of Darwin’s stature.”—The Sunday Times (London)

“A brilliant accomplished history—itself a work of genius.”—Publishing News (UK)

“Both moving and superbly documented…According to Keynes, Darwin was at a loss to understand why most naturalists at the time thought they saw evidence of ubiquitous, benevolent design in a world so full of pain, death and disease. ‘There seems to me,’ he wrote, ‘too much misery in the world’ for a loving deity to have designed it that way…With the slow death of Annie, the misery became personal. Some contemporary critics painted Darwin as a cold intellect with no place for love in his famous ‘struggle for existence.’ Keynes shows he was actually a man of uncommon warmth.”—Scientific American

“One of the most remarkable, moving biographies of recent years.” —The Scotsman

“An engrossing book, a biography with a difference. Keynes gives an excellent overview of Victorian writings on medicine, religion and science as they bore on the question of disease and death, especially the deaths of children, which raised with particular sharpness the question of God’s intention and benevolence. Above all, Keynes sets Darwin’s lonely progress in his researches on species directly in the context of family love and loss.”—Sunday Telegraph (London)

“In this intimate portrait…the great-great-grandson of the scientist, Keynes uses published documents as well as family papers and artifacts to show how Darwin’s thinking on evolution was influenced by his deep attachment to his wife and children. In particular, his anguish over his 10-year-old daughter Annie’s death sharpened his conviction that the operation of natural laws had nothing to do with divine intervention or morality. Keynes shows that much of Darwin’s intellectual struggle in writing On the Origin of Species and The Descent of Man arose from his efforts to understand the role of suffering and death in the natural order of the world…a moving tribute to a thinker who, despite intimate acquaintance with the pain inflicted by the ‘war of nature’ could still marvel that, from this ruthless struggle, ‘endless forms most beautiful and most wonderful have been, and are being, evolved.’”—Publishers Weekly

“Though there have been innumerable biographies of Darwin, there cannot have been any warmer portrayals of his humanity and his desire to discover meaning in human existence.”—The Irish Times

“Above all this is a love story: the love of Charles and Emma...and the love of both for their children.” —The Times (London)

“Fascinating...This is a wonderful portrait of a Victorian family in all its aspects…so extraordinary and so revealing.”—Birmingham Post

“It is a rare biography that reveals the key emotional moment in its subject’s personal and intellectual life so clearly as Randal Keynes does for Charles Darwin in Darwin, His Daughter & Human Evolution. What makes this book so moving and illuminating is the way Keynes tracks his subject’s emotional development and, more generally, shows how much his scientific thinking was influenced by his wife Emma and their 10 children. besides its contribution to the intellectual history of Darwinism, Darwin, His Daughter & Human Evolution is a delightful portrayal of mid-19th century family life.” —Financial Times (London)

“[An] intriguing family portrait. Darwin’s desperate search for signs of his dying daughter’s recovery make excrutiatingly poignant reading. Publication for this reason alone would be justified, if only to remind us of our debt to 20th century medicine. But there is much more to this story than the outlining of the vicissitudes of Victorian family life.”—Manchester Guardian Weekly

“Shows with impact how little science knew of t

▼▲
I'm the author/artist and I want to review Darwin, His Daughter, and Human Evolution - eBook.
Back
Back