Skip to main content
Called Out of Darkness Into Marvelous Light: A History of the Episcopal Diocese of Pittsburgh, 1750-2006 - eBook
By: Jeremy Bonner
Stock No: WW111828EB 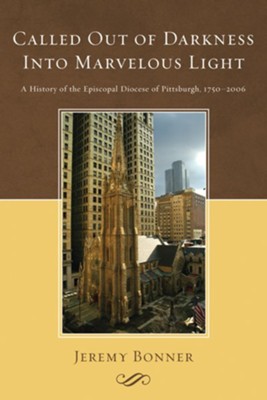 Called Out of Darkness Into Marvelous Light: A History of the Episcopal Diocese of Pittsburgh, 1750-2006 - eBook

▼▲
In the conflicted world that is today's Episcopal Church, the diocese of Pittsburgh stands both as a symbol of dissent and schism to the liberal majority within the American Church and as a beacon of light and hope to conservative Anglicans across the United States. Set in the unlikely surroundings of America's Rust Belt, Pittsburgh's Episcopalians have over the past half century undergone a dramatic reordering of priorities to embrace a novel--though hardly unprecedented--vision of Anglican confessionalism. Called out of Darkness into Marvelous Light traces the development of an Anglican presence in western Pennsylvania from the missionary activity of the late eighteenth century through the triumphs of post-Civil War Anglo-Catholicism and the first stirrings of the Social Gospel, to the unprecedented religious revival of the 1950s. Championed by such men as Bishop Austin Pardue and Samuel Moor Shoemaker, the founder of the Pittsburgh Experiment, a prayer-centered spirituality developed in the Pittsburgh diocese and brought a generation of active evangelicals to the region during the 1960s and 1970s. The founding of Trinity Episcopal School for Ministry in the mid-1970s consolidated the evangelical presence in the diocese and provoked a commitment to spiritual renewal that sat uneasily with many in the wider Episcopal Church. Grounded in local research, this study seeks to explore the process by which Pittsburgh acquired its present evangelical identity and to reveal the increasingly intricate web of relationships that it now enjoys beyond America's borders.

▼▲
Jeremy Bonner is an independent scholar in Pittsburgh, Pennsylvania. He is the author of The Road to Renewal: Victor Joseph Reed and Oklahoma Catholicism, 1905-1971 (2008) and has published scholarly articles on Mormon and Anglican history.

▼▲
I'm the author/artist and I want to review Called Out of Darkness Into Marvelous Light: A History of the Episcopal Diocese of Pittsburgh, 1750-2006 - eBook.
Back
Back