Skip to main content
Get Christmas Ready Sale: Deals on over 1,150 titles thru 9/27.
Dark Pursuit
By: Brandilyn Collins
Stock No: WW27642X 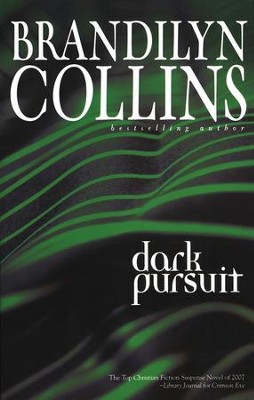 ▼▲
Once nicknamed "the King of Suspense," novelist Darell Brooke ruled the bestseller charts---until a car crash wrecked his concentration. Now bitter and reclusive, he teams up with his troubled 22-year-old granddaughter, Kaitlan, to solve a real-life mystery. Catching the criminal could save Kaitlan's life and rescue Darell's literary career---if they survive the ordeal! 352 pages, softcover from Zondervan.

"Ever hear the dead knocking?" Novelist Darell Brooke lived for his title as King of Suspense—until an auto accident left him unable to concentrate. Two years later, reclusive and bitter, he wants one thing: to plot a new novel and regain his reputation. Kaitlan Sering, his twenty-two-year-old granddaughter, once lived for drugs. After she stole from Darell, he cut her off. Now she’s rebuilding her life. But in Kaitlan’s town two women have been murdered, and she is about to discover a third. She’s even more shocked to realize the culprit is her boyfriend, Craig, the police chief’s son. Desperate, Kaitlan flees to her estranged grandfather. For over forty years, Darell Brooke has lived suspense. Surely he’ll devise a plan to trap the cunning Craig. But can Darell’s muddled mind do it? And—if he tries—with what motivation? For Kaitlan’s plight may be the stunning answer to the elusive plot he seeks . . .

Brandilyn Collins, known for her trademark Seatbelt Suspense™, is the bestselling author of Violet Dawn, Coral Moon, Crimson Eve, Eyes of Elisha, and other novels. She and her family live in Coeur d’Alene, Idaho. Visit her website at www.brandilyncollins.com and her blog at www.forensicsandfaith.blogspot.com

▼▲
Killers are suppose to be cold-hearted strangers, people whom you hear about and never meet, but what happens when you suspect someone close to you might be a murderer? In Dark Pursuit by Brandilyn Collins, Kaitlan Serig discovers that her boyfriend, the son of the police chief, might have caused three women to enter an early grave. She cant call 911, so she has to turn to the only family she has left: her grandfather, whom she once stole money from. Even if he doesnt turn her away, can Darrel help her? Will they be able to mend their broken relationship while trying to catch a killer?

From the first line, Collins ensnares her readers, compelling them to continue flipping pages. The book is not a typical suspense nor is it a cliché Christian novel. There are no Scripture references, but biblical themes are present throughout the book. One such theme can be reflected in Psalm 46:1, God is our refuge and strength, a very present help in times of trouble(NKJV). There is one aspect of the book that may be mildly offensive to some Christians. One of the characters claims that God turned her life away from drugs and gave her a fresh start. Yet, during the course of the novel this same unmarried character finds out that she is six weeks pregnant. However, this is somewhat redeemed by the fact that she decides to keep the child and not have an abortion.

Overall, Dark Pursuit is an enthralling story. Because it is not an in-your-face Christian story, it can appeal to both non-Christians as well as Christians. The theme of God always being there to help is a strong message, one that is not overpowered by Scripture. I recommend this book to young adult and adults, especially those who might need a little push toward God. -- Marissa Willems, www.ChristianBookPreviews.com

Tell us a little about yourself.  I'm known for writing my trademarked Seatbelt Suspense®--stories that are fast-paced from page one, feature three-dimensional characters, are full of twists, and include a faith thread woven naturally into the story. DARK PURSUIT is my 18TH book.

What was your motivation behind this project?  It started with a favorite quote of mine from John Milton's Paradise Lost. After Satan and his minions have been thrown out of heaven, they're plotting to storm heaven's gates and overthrow God. Beelzebub speaks up and says what a dumb idea that is--God's too powerful. He instead suggests that they wreak havoc with this use new planet called earth, inhabited by a loathsome creature called Man. God seems to love this creature for some reason, and bringing evil to Earth will really get back at God. Better this plan than sitting around in hell "hatching vain empires." Hatching vain empires. Isn't that a great phrase? That's just what Satan still tried to do with Man. He wants to lead us to hatch our own vain empires rather than follow God's plan for our lives. VAIN EMPIRES was the original title for this book. I started to think about Satan tempting Man, and how temptation plays out all these thousands of years later in our present day world. Satan's M.O. is still the same--he presents death (evil) veiled as life. As he told Adam and Eve in the garden, "You shall not surely die." He told them they would live like never before, having the knowledge of God, when in truth they WOULD die a spiritual death. I set out to write a modern-day suspense based on this idea of Satan presenting death as life. Hence the crazy, over-the-top perceptions of the killer, who uses a black and green (symbolizing death and life) cloth to strangle victims. The killer is an analogy of Satan's ways. Easy to see the crazed thinking in the killer's mind, but as Satan presents so many temptations to us (again in the form of good/life when they really represent evil/death) how often do we realize his ploys? As a result, DARK PURSUIT is more a Christian novel due to its underlying symbolism rather than overt references to Christ. It's also, as it turns out, a novel of a redemption of sorts in Darell's life.

Anything else you'd like readers / listeners to know:  Some readers enjoy DARK PURSUIT simply for its surface suspense story, which is wild and tense. Others who look below the surface will see the underlying meaning of the story. If you read my books regularly, you'll see that the amount of Christian content varies quite a bit from one story to another. That's because the faith element must arise naturally from who the protagonist is and the cataclysmic events of the story. I never want to force Christian content into a story. By the way, don't rush through the very end of DARK PURSUIT. I know my readers are flipping pages and anxious to see what happens--sometimes so much so that they can miss key elements. The ending of this book is a bit different. Savor the nuances.