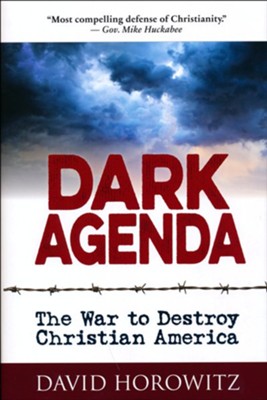 A New York Times bestselling author and leading conservative thinker, David Horowitz warns that the rising attacks on Christians and their beliefs threaten all Americans—including Jews like himself. The liberal establishment and their radical allies envision a new millennium in which Christianity is banished, Horowitz argues. He says that Judeo-Christian values are at the very root of America's democracy. Kill off such values and all of our freedoms could perish.

In Dark Agenda: The War to Destroy Christian America, Horowitz examines how our elites—increasingly secular and atheist—are pushing a radical agenda. Filled with stories that demonstrate the mind-numbing reasons behind the secular left's smug disdain for Christianity, Horowitz traces the history of religious liberty from the Founding Fathers to now. He shows how the Founding Fathers put aside their own skepticisms about God and religion to write The Declaration of Independence.

In this book, Horowitz delivers an impassioned plea for the restoration of political sanity in America, a perspective that made America great by respecting the faiths of our fathers and mothers.

▼▲
I'm the author/artist and I want to review Dark Agenda: The War to Destroy Christian America.
Back
×
Back
×