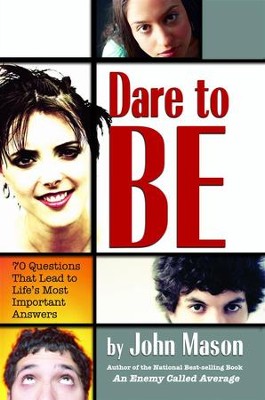 Dare to Be - eBook

▼▲
There's a way to know where to go when you look at your future. It's a secret all successful people use―asking the right questions. Best–selling author John Mason unveils a lifetime of wisdom in the seventy indispensable questions designed to find answers to building a better life! If you're just starting out on life's journey or have been there a while and want a new direction, get ready to discover:

▼▲
JOHN MASON is a national best–selling author, minister, executive author coach, and noted speaker. He's the founder and president of Insight International and Insight Publishing Group; organizations dedicated to helping people reach their dreams and fulfill their God–given destiny. He has authored eighteen books including An Enemy Called Average, You're Born An Original–Don't Die A Copy, Let Go of Whatever Makes You Stop, and Know Your Limits–Then Ignore Them which have sold nearly two million copies and are translated into thirty–five languages throughout the world. His books are widely respected as a source of godly wisdom, scriptural motivation and practical principles. His writings have twice been published in Reader's Digest along with numerous other national publications. Six of his books have reached the #1 spot on Amazon best–seller lists. Known for his quick wit, powerful thoughts and insightful ideas, he is a popular speaker across the U.S. and around the world. John and his wife, Linda, have four children: Michelle, Greg, Michael and David. They reside in Tulsa, Oklahoma.