Skip to main content
Danny and the Dinosaur and Friends: Level One Box Set
By: Various Authors
Stock No: WW313292 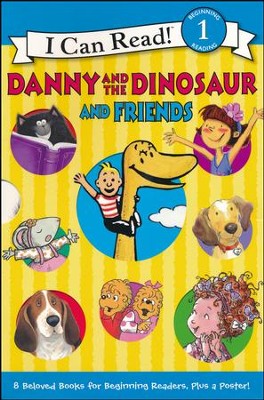 Danny and the Dinosaur and Friends: Level One Box Set

▼▲
Practice your reading with this Level 1 Beginning Reader Book Set! Featuring 8 softcover books with stories on your favorite characters, Penny, The Berenstain Bears, Amelia Bedelia, Dixie, Danny the Dinosaur, Fancy Nancy, Charlie the Ranch Dog, and Splat the Cat. Each book is perfect for eager new readers with simple concepts, familiar words, and short sentences. Includes a fun poser featuring all the characters!

Featuring Danny and the Dinosaur and seven other most beloved I Can Read characters together, this collection of favorite easy-to-read I Can Read stories is full of familiar faces—and comes with a free poster starring our most popular characters! This Level One slipcase is perfect for children learning to sound out words and sentences.

The collection includes the following eight new and classic Level One I Can Read books: Danny and the Dinosaur, Amelia Bedelia Makes a Friend, The Berenstain Bears and the Shaggy Little Pony, Charlie the Ranch Dog: Charlie’s New Friend, Dixie, Fancy Nancy and the Too-Loose Tooth, Penny and Her Song, and Splat the Cat and the Duck with No Quack.

Level One I Can Read books are perfect for children learning to sound out words and sentences.

HarperCollins Publishers is a proud supporter of First Book, a national nonprofit organization whose mission is to give children from low-income families the opportunity to read and own their own new books. The primary goal of First Book is to work with existing literacy programs to distribute new books to children who, for economic reasons, have little or no access to books. In this way, First Book effectively leverages the heroic efforts of local tutoring, mentoring, and family literacy organizations as they work to reach children who need help the most. First Book distributes millions of books to hundreds of thousands of children nationwide each year. For more information on First Book, please visit www.firstbook.org.

Stan and Jan Berenstain were already successful cartoonists for magazines and adult humor books when they began writing children's books. The first story starring the bear family, The Big Honey Hunt, appeared in 1962. Since then, more than 370 Berenstain Bears books have been published, and more than 300 million copies have been sold. What began as an idea sparked by their young sons' love of reading has become over the years arguably the best-selling children's book series ever.

Since their inception, the Berenstain Bears stories have expanded to include picture books, beginning readers, and chapter books--even a hit TV show on PBS. Writing and illustrating the books has become a Berenstain family affair. Mike joined with his parents as a creative team in the late 1980s. The Bear family has expanded over the years as well. Sister Bear arrived in 1974, and baby Honey joined the family in 2000.

Though Stan died in 2005 and Jan in 2012, Mike continues to create the delightful Berenstain Bear adventures from his studio in Pennsylvania.

Kevin Henkes is an award-winning author and illustrator of many books for children of all ages. He received the Caldecott Medal for Kitten’s First Full Moon; Caldecott Honors for Waiting and Owen; two Newbery Honors—one for Olive’s Ocean and one for The Year of Billy Miller—and Geisel Honors for Waiting and Penny and Her Marble. His other books include Egg, Old Bear, A Good Day, Chrysanthemum, and the beloved Lilly’s Purple Plastic Purse. Kevin Henkes lives with his family in Madison, Wisconsin. www.kevinhenkes.com

Syd Hoff was a much-loved and much-read author and illustrator of numerous books for children, most notably the Danny and the Dinosaur titles and Sammy the Seal. Born and raised in New York City, he studied at the National Academy of Design and sold his first cartoon to The New Yorker when he was eighteen. His cartoons became regular features in many magazines and newspapers. Sid Hoff was born in 1912 and died in 2004, at ninety-one. His books continue to delight readers worldwide.

Jane O’Connor is an editor at a major publishing house who has written more than seventy books for children, including the New York Times bestselling Fancy Nancy series. She resides (that’s fancy for lives) with her family in New York City.

Herman Parish was in the fourth grade when his aunt, Peggy Parish, wrote the first book about Amelia Bedelia. The author lives in Princeton, New Jersey.

Rob Scotton is the bestselling author and illustrator of Splat the Cat; Love, Splat; Merry Christmas, Splat; Scaredy-Cat, Splat!; Russell the Sheep; Russell and the Lost Treasure; and Russell’s Christmas Magic. His work can also be found on greeting cards, ceramics, textiles, prints, stationery, and glassware. An honors graduate of Leicester Polytechnic, Rob now lives in Rutland, England, with his wife, Liz, who is also an artist.

▼▲
I'm the author/artist and I want to review Danny and the Dinosaur and Friends: Level One Box Set.
Back
Back