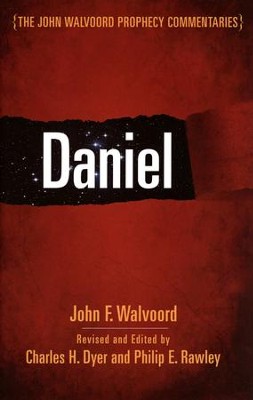 ▼▲
Perhaps no Old Testament book is as far-reaching in envisioning historical events as the Book of Daniel. In this revised edition of his classic work on premillennial prophecy, Walvoord addresses alleged historical inaccuracies, considers past and future fulfillments of specific prophecies, explores different approaches to interpretation, and examines textual and doctrinal issues. Based on the ESV. 256 pages, hardcover from Moody.

The book of Daniel is key to the entire Old Testament prophetic revelation. Who better to help you understand Daniel's stories, prophecies, and dreams—and give you a brighter hope for things to come—than John F. Walvoord, one of evangelicalism's most prominent leaders, and Charles Dyer, a Bible professor and expert on Israel?

In this second work of a renewed series of commentaries, Dr. Walvoord addresses alleged historical inaccuracies and considers past and future fulfillments of specific prophecies. At key points different views and approaches to interpretation are explored.  Walvoord devotes special attention to textual and doctrinal issues while avoiding technical language.

Refined, updated with the English Standard Version (ESV), and streamlined, this classic text is set to help you understand and interpret the book of Daniel and gain a better grasp of what the future may bring.

▼▲
JOHN F. WALVOORD (A.B., D.D., Wheaton College; A.M., Texas Christian University; Th.B., Th.M., Th.D., Dallas Theological Seminary), former president of Dallas Theological Seminary and editor of Bibliotheca Sacra, America's oldest theological quarterly, was recognized as one of the leading evangelical theologians in America and an authority on systematic theology and eschatology. His academic background and extensive travel in the Middle East greatly enriched his theological and eschatological studies. He authored numerous books on theology and biblical prophecy, including The Revelation of Jesus Christ, Jesus Christ Our Lord, and Daniel: The Key to Prophetic Revelation.

CHARLES DYER (B.A., Washington Bible College; Th.M. and Ph.D., Dallas Theological Seminary) served as provost and dean of education at Moody Bible Institute before becoming Professor-at-Large of Bible at Moody and host of The Land and the Book radio program. Before coming to Moody, Charlie served for 20 years in multiple administrative and faculty roles at Dallas Theological Seminary - ultimately serving as Executive Vice President under Chuck Swindoll. In addition to his role as host of The Land and the Book radio program, Charlie is an Old Testament scholar and an authority on Middle Eastern history and geography. He also serves as Associate Pastor of Grace Bible Church in Sun City, Arizona. Charlie has traveled extensively throughout the Middle East for more than 30 years, leading more than 80 trips. He is the author of numerous books, including A Voice in the Wilderness, What's Next?, The New Christian Traveler's Guide, Character Counts: The Power of Personal Integrity, and Thirty Days in the Land with Jesus. His most recent book is The Isis Crisis. Charlie and his wife, Kathy, have been married for more than 40 years and have two grown children.

▼▲
I'm the author/artist and I want to review Daniel: The John Walvoord Prophecy Commentary.
Back
×
Back
×