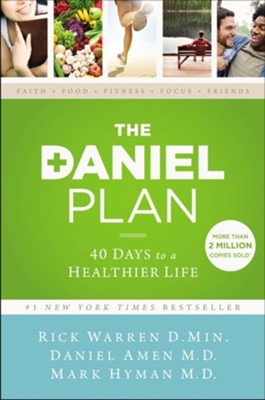 The Daniel Plan: 40 Days to a Healthier Life - eBook

The Daniel Plan is far more than a diet plan. It is an appetizing approach to achieving a healthy lifestyle by optimizing the five key essentials of faith, food, fitness, focus, and friends.

Unlike the thousands of other books on the market, this book is not about a new diet, guilt-driven gym sessions, or shame-driven fasts. Your path to holistic health begins here, as Pastor Rick Warren and fitness and medical experts Dr. Daniel Amen and Dr. Mark Hyman guide you to incorporate healthy choices into your current lifestyle.

It's time to feast on something bigger than a fad. Start your journey to impactful, long-lasting, and sustainable results today!

As founding pastor of Saddleback Church, Dr. Rick Warren leads a 30,000-member congregation in California with campuses in major cities around the world. As an author, his book The Purpose Driven Life is one of the bestselling nonfiction books in publishing history. As a theologian, he has lectured at Oxford, Cambridge, Harvard, University of Judaism, and dozens of universities and seminaries. As a global strategist he advises world leaders and has spoken to the United Nations, US Congress, Davos Economic Forum, TED, Aspen Institute, and numerous parliaments. Rick has also founded the Global PEACE Plan, which Plants churches of reconciliation, Equips leaders, Assists the poor, Cares for the sick, and Educates the next generation in 196 countries. You can listen to Pastor Rick’s Daily Hope, his daily 25-minute broadcast, or sign up for his free daily devotionals at PastorRick.com.

The Washington Post called Daniel Amen, MD the most popular psychiatrist in America and Sharecare named him the web’s #1 most influential expert and advocate on mental health.  Dr. Amen is a physician, double board certified psychiatrist, television producer and ten-time New York Times bestselling author.  He is the Founder and Medical Director of Amen Clinics in Costa Mesa and San Francisco, California, Bellevue, Washington, Reston, Virginia, Atlanta, Georgia and New York, New York.

▼▲
I'm the author/artist and I want to review The Daniel Plan: 40 Days to a Healthier Life - eBook.
Back
Back