Skip to main content
HOURS LEFT! UP TO 76% OFF BIBLE SALE: Save on over 1,100 Bibles. >
Daniel-Malachi, Revised: The Expositor's Bible Commentary
By: Tremper Longman III, David E. Garland
Stock No: WW68936 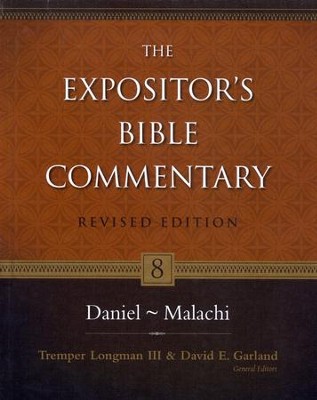 
Kenneth L. Barker (PhD, Dropsie College for Hebrew and Cognate Learning) is an author, lecturer, biblical scholar, and the general editor of the NIV Study Bible.


Andrew E. Hill (PhD, University of Michigan) is professor of Old Testament studies at Wheaton College in Illinois. He is the coauthor with John Walton of A Survey of the Old Testament and the author of Malachi in the Anchor Bible commentary series. His articles have appeared in such scholarly publications as Hebrew Annual Review, Journal of Biblical Literature, and Vetus Testamentum.


Dr. M. Daniel Carroll R.(Rodas) (PhD, University of Sheffield), is Earl S. Kalland Chair of Old Testament at Denver Seminary. Prior to this appointment, he was professor of Old Testament and ethics at El Seminario Teológico Centroamericano in Guatemala City, Guatemala, where he remains an adjunct professor (Danny is half-Guatemalan). He has published Contexts for Amos: Prophetic Poetics in Latin American Perspective (T. & T. Clark) and Amos- the Prophet and His Oracles: Research on the Book of Amos (Westminster John Knox), and regularly writes for Spanish and English language journals. He has edited or co-edited seven other books, several of which deal with Old Testament social ethics. Danny serves on the editorial consulting boards of Ex Auditu, Religion & Theology (South Africa), and DavarLogos (Argentina) and is a contributing editor to Prism, the journal of Evangelicals for Social Action. Richard D. Patterson (PhD, University of California, Los Angeles) is distinguished professor emeritus, Liberty University. He has been involved in twelve different Bible projects either as a translator, peer reviewer, or contributor. He has written well over 100 articles for major publishers and periodicals, and has served as associate editor of Zondervan's New International Dictionary of Old Testament Theology and Exegesis. He is currently authoring Joel and Kings (with Hermann Austel) for the second edition of the Expositor's Bible Commentary series. He and his wife, Anna, live in Simpsonville,South Carolina.
Thomas Edward McCominskey was professor of Old Testament and Semitic languages and director of the Ph.D. program at Trinity Evangelical Divinity School.

▼▲
I'm the author/artist and I want to review Daniel-Malachi, Revised: The Expositor's Bible Commentary.
Back
Back