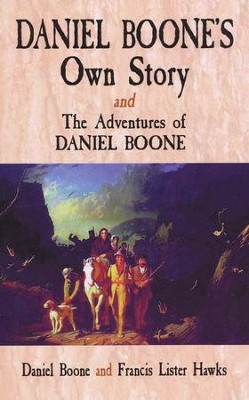 ▼▲
Launched into American myth and folklore within his own lifetime, Daniel Boone led a life that would eventually be seen as representing the spirit of Manifest Destiny. This two-part tale begins with a brief profile by Boone, himself, covering his deeds in Kentucky from 1769-1784. The second part chronicles his life cradle to grave, including the accounts of his capture and adoption by the Shawnee and his service as a militiaman during the Revolutionary War. 126 pages, softcover.

▼▲
"Many dark and sleepless nights have I been a companion for owls, separated from the cheerful society of men, scorched by the summer's sun and pinched by the winter's cold — an instrument ordained to settle the wilderness."
Motivated by a powerful sense of purpose, Daniel Boone blazed the Wilderness Road through the Cumberland Gap. Thousands followed, settling in Boonesborough, Kentucky, to form one of the first English-speaking communities west of the Appalachians. This two-part tale of the legendary frontiersman's life begins with a brief profile by Boone himself, covering his exploits in the Kentucky wilderness from 1769 to 1784. The second part chronicles Boone's life from cradle to grave, with exciting accounts of his capture and adoption by Shawnee Indians and his service as a militiaman during the Revolutionary War.

▼▲
A legend in his own lifetime, Daniel Boone (1734–1820) was among the country's first folk heroes. The hunter and explorer was a leader in westward expansion — by the close of the 18th century, more than 200,000 pioneers had followed in his footsteps across Kentucky.
Francis Lister Hawks (1798–1866) was an American Priest of the Episcopal Church and a politician in North Carolina. For 15 years, he was the official historiographer of the Protestant Episcopal Church.

▼▲
I'm the author/artist and I want to review Daniel Boone's Own Story & The Adventures of Daniel Boone.
Back
×
Back
×