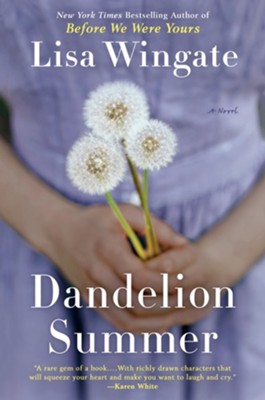 ▼▲
All of her life, Epiphany Salerno has been tossed like a dandelion seed in the wind. Now, at sixteen, she must move to the low-rent side of Blue Sky Hill with her indifferent mother. Half Italian and half African-American, Epie doesn't fit in. Even worse, she must work where she's not wanted: in an upscale home on The Hill.

J. Norman Alvord's daughter has hired a teenager to stay with him the in afternoons. Widowed and suffering from heart trouble, Norman wants to be left alone. But in Epie's presence, Norman discovers a mystery--memories of another life and a woman who saved him. As summer comes to Blue Sky, two residents from different worlds and different generations will find that with unexpected friendship comes the key to unlocking family secrets hidden for a lifetime...

▼▲
"A story beautifully told, with richly drawn characters that will...make you want to laugh and cry"* from the #1 New York Times bestselling author of The Book of Lost Friends and Before We Were Yours.

All her life, Epiphany Salerno has been tossed like a dandelion seed on the wind. Now, at sixteen, she must move to the low-rent side of Blue Sky Hill and work where she's not wanted: in an upscale home on The Hill.

J. Norman Alvord's daughter has hired a teenager to stay with him in the afternoons. Widowed and suffering from heart trouble, Norman wants to be left alone. But in Epie's presence, Norman discovers a mystery. Deep in his mind lie memories of another house, another life, and a woman who saved him.

As summer comes to Blue Sky Hill, two residents from different worlds will journey through a turbulent past, and find that with an unexpected road trip through sleepy Southern towns comes life-changing friendship...and clues to a family secret hidden for a lifetime.

▼▲
Lisa Wingate is the #1 New York Times bestselling author of over thirty novels. She is known for combining elements of Southern storytelling, mystery, and history to create novels hailed by Publishers Weekly as "masterful." Her novel Before We Were Yours remained on the New York Times bestsellers list for over five months and has been translated into thirty-five languages. While her work has received many awards, she most treasures the National Civics Award, presented by the kindness watchdog organization Americans for More Civility, to recognize public figures who work to promote greater kindness and civility in American life. She believes that stories can change the world.

▼▲
Wingate (Summer Kitchen) roots her tender tale in hope, redemption, and family by following two engaging characters in her latest entry to the Texas-based Blue Sky Hill series. Following the death of his wife, retiree J. Norman Alvord has shut himself off in his big home on the hill. Norman's only daughter thinks a nursing home is best, but Norman, who was on the scientific team involved with the first moon landing, considers himself independent, even virile. So a housekeeper is hired, and offers her mixed-race teenage daughter, Epiphany Jones, as an after-school cook. The friendship that Epiphany and Norman form begins a new chapter for both of them. Wingate's tale, unfolding alternatingly from Norman's and Epiphany's points of view, uncovers a mysterious memory from Norman's youth that eventually reveals siblings that he never knew about. Epiphany finds a mentor in Norman; in turn, she helps him understand the importance of family. Wingate effectively draws us into Norman's mystery, giving voice to elders who wish to be treated as adults as their own kin treat them like children. The early era of space exploration serves as an exciting backdrop to the kitchen sink drama. (July) Copyright 2011 Reed Business Information.

"A rare gem of a book....It's a story beautifully told, with richly drawn characters that will squeeze your heart and make you want to laugh and cry at the same time.  Like dandelion seeds, J. Norm and Epie will take root in your heart and stay with you long after you've closed the last page."—*New York Times bestselling author Karen White

"A gripping and beautifully told story that crosses generations and reminds us it is love that changes our world. With both startling insight and humor, Lisa Wingate tells a story that takes the reader to the moon and back to the human heart. Dandelion Summer has a compassionate and lyrical heartbeat you won't want to miss."—New York Times bestselling author Patti Callahan Henry

"Humor, family drama and an unlikely friendship meld together to make Wingate’s latest novel shine. The author’s real strength is in her character development, giving each character a unique and likable personality—even when it’s a prickly one on the surface."—RT Book Reviews

"Wingate’s novels, like those of Nicholas Sparks and Richard Paul Evans and others, takes a middle ground between Christian and mainstream fiction—uplifting, clean and inspiration but not overtly religious."—Bryan-College Station Eagle

"A remarkably talented and innovative writer, with a real feel for human emotions."—Linda Lael Miller

▼▲
I'm the author/artist and I want to review Dandelion Summer - eBook.
Back
Back