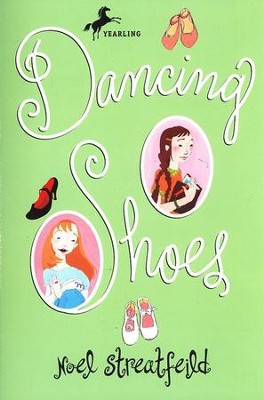 ▼▲
Life at Mrs. Wintle's School of Dancing is a big change for Rachel and her sister, Hilary. Tap lessons, musical comedy, singing lessons, arobatics--it's a far cry from the quiet country life they led before mother died. Now they're living in London with eccentric Aunt Cora Wintle, who's determined to turn them into members of her dance troupe, Wintle's Little Wonders. But Rachel doesn't want to be a Little Wonder! She can't dance, and she'd rather die than wear the ruffly costume. Not only that, she doesn't want Hilary to be a Little Wonder either. Hilary is truly talented, and should be studying with the Royal Ballet! To make matters worse, there's conceited cousin Dulcie. She's the school's star dancer and the apple of Aunt Cora's eye. And if there's one thing Dulcie hates, it's the thought that someone else might be as good a performer as she is.

▼▲
A beautiful gift edition of the beloved classic about two orphan sisters and their newfound love of theater and dance.

After losing their mother, Rachel and her adopted sister Hilary move in with their aunt, Cora Wintle. Cora runs a dancing school in London, and she thinks that Hilary would be perfect for her dancing troupe, Wintle's Little Wonders! The only problem is that Hilary might be as good as Cora's own precious daughter, Dulcie. Still, Cora is determined to make sulky Rachel and sprightly Hilary members of her dance troupe.

But Rachel doesn't want to be a Little Wonder! She can't dance and feels silly in her the ruffly costume. Nothing seems to be going as planned, until Rachel discovers her talent for acting. . . .

This classic children's book is perfect for kids who dream of being on stage, whether it be dancing or acting. And don't miss the other classic Noel Streatfeild titles, Ballet Shoes, Skating Shoes, and Theater Shoes!

▼▲
Noel Streatfeild was born in Sussex in 1895 and was one of three sisters. Although she was considered the plain one she ended up leading the most glamorous and exciting life! After working in munitions factories and canteens for the armed forces when WWI broke out, Noel followed her dream of being on stage and went to the Royal Academy of Dramatic Arts, where she became a professional actress. She began writing children's books in 1931 and Ballet Shoes was published in 1936. She quickly became one of the most popular authors of her day. When she visited Puffin exhibitions, there were queues right out of the building and all the way down the Mall. She was one of the first winners of the Carnegie Medal and was awarded an OBE in 1983. Noel Streatfeild lived in London. She died in 1986.

▼▲
I'm the author/artist and I want to review Dancing Shoes.
Back
Back