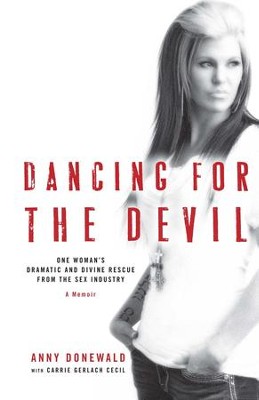 Dancing for the Devil - eBook

▼▲
An explosive memoir of transformation from a high-end stripper and escort who hit rock-bottom, turned to God, and left the sex trade to found Eve’s Angels, a ministry reaching out to women in the sex industry.

Growing up as the daughter of an NCAA Championship-winning basketball coach and a stay-at-home mom, Anny Donewald had a seemingly blessed childhood. Then, at thirteen, one of her father’s players sexually abused her, and Donewald embarked on a path toward self-destruction.

Then, this long-legged, fiery blonde fought to free herself from the sex trade, and, by the healing grace of God, launched her non-profit, Eve’s Angels, which reaches out to girls who want out of the sex trade.

Dancing for the Devil takes an in-depth look at Anny’s struggles and sheds a new insider’s light on the horrible reality of the sex industry from someone who’s seen the worst of it. This captivating memoir shows how women from all walks of life find themselves trapped by the sex trade and, most importantly, explains how they can get out, start over, and find the love of Christ. Courageous and unforgettable, Dancing for the Devil is a heartbreaking story of darkness, grace, and, ultimately, redemption.

▼▲
Anny Donewald is the founder of Eve’s Angels, a Christian not-for-profit organization that ministers the word of Jesus Christ to women in the sex industry. Anny is a sex industry survivor who reveals that no one is immune to sin or salvation. The Western Michigan University alumnus has a B.S. in Family Studies and resides in the Midwest with her two children. Carrie Gerlach Cecil, an inspirational and entertaining speaker and author, creates literary, television, film, online, and live content to impact and counter both pop and religious culture. A founding partner of Unfiltered Faith, her last novel, One Sunday, received critical praise and the national media spotlight. For more information, visit CarrieGerlachCecil.com.

▼▲
I'm the author/artist and I want to review Dancing for the Devil - eBook.
Back
×
Back
×