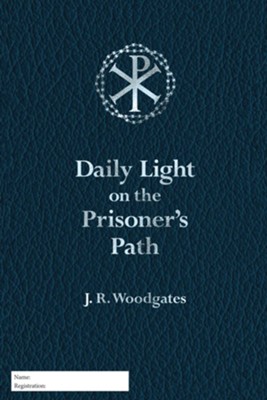 Daily Light on the Prisoner's Path

▼▲
Your incarcerated relative or friend is facing daily physical and spiritual perils. Help him out by ordering him this unique daily Christian survival guide.

Order another copy for yourself and be refreshed along with him by the morning and evening scripture selections (KJV) as he finds relief from the despair and discord surrounding him. He will learn of God's eagerness to bless him, restore him, and make him a channel of supernatural grace to other inmates.

Daily Light on the Prisoner's Path will show him how to: This is the only comprehensive Christian resource available for men behind bars.

Now parents, pastors, chaplains, prison ministries, spouses, other family members and friends can give to men living in confinement a life-restoring companion for use every day along their often-perilous prisoner path.

▼▲
J. R. Woodgates graduated from Northwestern University in 1975 with a degree in broadcast journalism, then enjoyed a long radio career, internationally for 27 years at the Voice of America, locally in Washington, DC for 13 years at WETA part-time. In 2006-7, he experienced nine months as a federal prison inmate, having pled guilty to a single charge of child pornography possession. The formal process of church discipline and restoration Woodgates went through, coupled with the surprising depth of Christian fellowship he enjoyed behind bars, were life-changing. Now, as an advocate for restorative justice, he wants prisoners everywhere to learn about and experience the relief, restoration and empowerment they can enjoy as repentant, forgiven, and blessed sons of the Father. Until 2009, Woodgates was a lifelong Episcopalian (a "preacher's kid"). Today, he is a founding member of the Anglican Church in North America.

▼▲
This devotional is a treasure. I wish it had been available to me during my time in prison. Your book inspired, consoles, and helps focus the reader on his relationship with God. To a prisoner it will be a lifeline. Prisons are very dark places; the Devil owns the corridors. However, your book will shine brightly and give hope to prisoners.
-Pat Nolan,
Director, Center for Criminal Justice Reform, Washington, DC, former Vice President Prison Fellowship and Justice Fellowship

Tell us a little about yourself.  I graduated from Northwestern University in 1975 with a degree in broadcast journalism, and then enjoyed a long radio career, internationally for 27 years at the Voice of America, and locally in Washington, DC for 13 years at WETA part-time. Until 2009 I was a lifelong Episcopalian ("preacher's kid"). Today I am a founding member of the Anglican Church in North America.

What was your motivation behind this project?  My own nine month experience as an inmate in a federal prison led to friendships with several men who had come there deeply corrupted by sin but were now walking with integrity as new creatures in Christ. There I saw the great need in prisons for men to have access to a comprehensive guide to Christian spiritual formation.

What do you hope folks will gain from this project?  Certain knowledge of how any prisoner can be transformed and restored by Gods favor and goodness, despite whatever criminal activities he has engaged in. The need for prisoners to know some kind of consolation and purpose behind bars is critical. For men, especially, the restless animal frustration they naturally feel at being locked up, coupled with the personal crisis of losing their established identity and status, leads to a clash of impulses between hopeless resignation and defiant assertiveness. Most of them already know their need of Gods forgiveness and help but feel unworthy to ask him for it. Because they want to believe what this book says about Gods love for them, they respond eagerly to it.

How were you personally impacted by working on this project?  Writing this book on Christian spiritual formation clarified my understanding of what it means to be a follower of Jesus.

Who are your influences, sources of inspiration or favorite authors / artists?  When I was in prison, someone sent me THE CONVICT CHRIST, by Jens Soering, a Christian serving a double life sentence in the Virginia state prison system. His book broadened my thinking about the disturbing contrasts between true biblical justice and the criminal justice system as we know it. Timothy Keller's GENEROUS JUSTICE reinforced my determination to tell prisoners how to stop seeing themselves as just condemned criminal outcasts but as fully forgiven and blessed sons of the Father.

Anything else you'd like readers / listeners to know:  All sales proceeds from the book help fund my non-profit program, Prisoners Path Books, which provides free copies of DLPP and the recommended resources referenced in it to prison chaplains who request them.