Skip to main content
CYBER WEEK SALE! Spot great deals up to 88% off. >
Cynicism and Christianity in Antiquity
By: Marie-Odile Goulet-Cazé
Stock No: WW875556 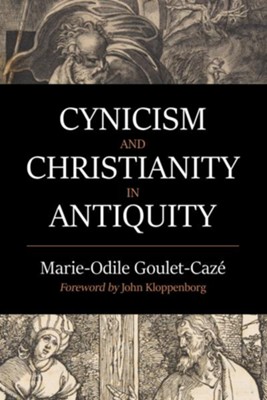 Cynicism and Christianity in Antiquity

Was Jesus really a Cynic? This book examines the arguments submitted by some New Testament scholars who believe that Jesus and his disciples were influenced by the ethics and social behaviors of Cynic preachers in Galilee.

In examining the "Cynic Jesus hypothesis," Marie-Odile Goulet-Cazé offers a reliable, accessible, and fully documented summary of Cynicism and its ideas, from Diogenes to the Imperial Period, and she investigates the extent and nature of contact between Cynics and Jewish people, especially in the first century BCE and CE. While recognizing similarities between the ideas and morals of ancient Cynicism and those evident in early Christian movements, Goulet-Cazé identifies more significant, fundamental differences between them in terms of culture, theology, and worldview.

Marie-Odile Goulet-Cazé has been a researcher at Centre National de la Recherche Scientifique in Paris, France, since 1978 and is now director emerita of research at CNRS. She served as president of the International Society of Classical Bibliography, which publishes L'Année philologique, and she has written several books on Cynicism and ancient philosophy.

▼▲
Margarethe Billerbeck
— University of Fribourg
"Marie-Odile Goulet-Caz&eacute;’s numerous publications have made a lasting mark on modern research on Cynicism. Thoroughly investigated and carefully argued, this book is an excellent and timely study of the relationship between ancient Cynicism and early Christianity. The recent papal attacks on luxury and the conspicuous concern for socially marginalized persons have triggered harsh reactions from conservative dogmatists and ecclesiologists. The acute source analysis shows that despite all the differences between the shameless followers of Diogenes and the disciples of Jesus, there were also points of contact in the choice for uncompromising moral behavior. Goulet-Caz&eacute; furnishes an extended perspective to the historians of philosophy and provides New Testament theologians with well-grounded materials for the exegesis of the Q source of the Gospels."

Bracht Branham
— Emory University
"No one has taught us more about the history and philosophy of Cynicism than Marie-Odile Goulet-Caz&eacute;. Cynicism and Christianity in Antiquity is a landmark study and will be the starting point for all future research on this topic."

John Cook
— LaGrange College
"Marie-Odile Goulet-Caz&eacute;, after a lifetime of study, is one of the world’s leading authorities on ancient Cynicism. Her careful and precise arguments gently demolish the so-called Cynic hypothesis—which holds that Jesus and his disciples in Galilee might have known Cynics and, consequently, that they might have been decisively influenced by the morality and behavior of the itinerant Cynic preachers."

William Desmond
— Maynooth University, Ireland
"Possible relations between Cynicism, Judaism, Jesus, and early Christianity have long been a source of controversy. Goulet-Caz&eacute; performs a most welcome task in striving to present the salient issues and scholarship in the most objective and systematic way possible. Her four chapters—on the diversity of Hellenistic and Roman Cynicism, its contacts with contemporary Judaism, its partial similarities with the Jesus movement, and shifting appeal to Christians of later antiquity—are concise, yet precise and finely nuanced. Packed with information and reflection on a wide range of phenomena that on all sides resists easy generalization, Cynicism and Christianity in Antiquity will be essential reading on a difficult topic. It comes highly recommended."

▼▲
I'm the author/artist and I want to review Cynicism and Christianity in Antiquity.
Back
Back