BRING CHRISTMAS HOME SALE: Save up to 85% through 11/2 >
Film as Cultural Artifact: Religious Criticism of World Cinema
By: Mathew P. John 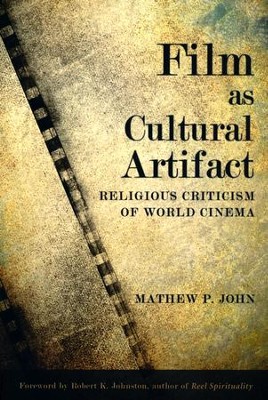 Film is popularly described as a mirror of culture. It plays a pivotal role in facilitating intercultural dialogue in our global village. World cinema helps us understand and appreciate each other's cultural identity, and promotes harmony across different cultures in our pluralistic society. It introduces us to the life of "the other" in an entertaining yet engaging fashion, creating cultural bridges that foster a sense of unity in the midst of our diversity.

This book argues that cultural anthropology and theology offer two distinct, yet intrinsically connected theoretical frameworks to formulate a more "holistic" reading of religion from world cinema. It proposes an integrated methodology for religious criticism of film in which we look at religion as a subsystem of culture and observe how religious experiences depicted on the screen are mediated through the personal bias of the auteur and the context in which the film is produced. It thus creates a renewed appreciation for the religious diversity in our world by providing a new way of observing and interpreting ethnographic information from world cinema.

▼▲
I'm the author/artist and I want to review Film as Cultural Artifact: Religious Criticism of World Cinema.
Back
×
Back
×