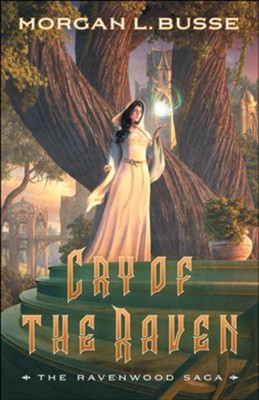 Cry of the Raven (The Ravenwood Saga Book #3) - eBook

▼▲
Lady Selene Ravenwood has come into her full power as a dreamwalker just as the war with the Dominia Empire begins. Working with the other Great Houses, Selene and Damien use their gifts to secure the borders and save those devastated by the war. But conflict, betrayal, and hatred begin to spread between the Great Houses, destroying their unity as the empire burns a path across their lands. At the same time, Damien Maris starts to lose his ability to raise the waters, leaving the lands vulnerable to the empire's attacks.

The only one who can unite the houses and restore her husband's power is Selene Ravenwood. But it will require that she open her heart to those who have hurt her and let go of her past, despite the one who hunts her and will do anything to stop her power.

Will Selene survive? Or is she destined to fall like the dreamwalkers before her?

▼▲
Morgan L. Busse is a writer by day and a mother by night. She is the author of the Follower of the Word series and the steampunk series The Soul Chronicles. Mark of the Raven won the 2019 Carol Award and the 2019 INSPY Award. During her spare time she enjoys playing games, taking long walks, and dreaming about her next novel. She and her family live in Fredericksburg, Virginia. Visit her online at www.morganlbusse.com.

▼▲
I'm the author/artist and I want to review Cry of the Raven (The Ravenwood Saga Book #3) - eBook.
Back
Back