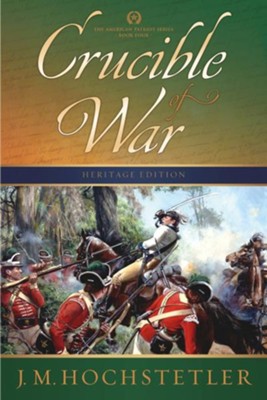 ▼▲
Brigadier General Jonathan Carleton rejoins General George Washington's army to find the patriot cause all but lost. In a daring gamble, the American force crosses the Delaware River during a raging nor'easter to attack the Hessian outpost at Trenton. While Elizabeth Howard anxiously waits for news of the outcome, the American force wins a stunning victory, then fights the British to a draw at Princeton before vanishing into the mountain bastions around Morristown.

Returning to New York, Elizabeth is drawn ever deeper into the dangerous intrigues that swirl around General William Howe-and the increasingly passionate attentions of Dr. Pieter Vander Groot, who allegiance now belongs to the rebels. When Carleton is forced to take the doctor prisoner, Elizabeth moves to Philadelphia to wait for Howe's attack on the city.

With the Americans digging in at Brandywine Creek, Carleton is betrayed by a trusted aide and comes within a hair's breadth of being captured. Washington orders him to the upper Hudson Valley, where a force commanded by British General John Burgoyne closes in on Saratoga. With decisive battles looming on all fronts, Elizabeth and Carleton are torn from each other's arms to face a crucible of war and trial that will test their mettle and their love to the very limits.

▼▲
She rescued him from the hangmans noose. Now, in the patriots darkest hour, can he save her from an even more desperate fate?

▼▲
An award-winning author and editor, J. M. Hochstetler is the daughter of Mennonite farmers, a graduate of Indiana University, a professional editor, and a lifelong student of history. Her contemporary novel One Holy Night was the Christian Small Publishers 2009 Book of the Year and finalist for the American Christian Fiction Writers 2009 Carol Award.

▼▲
I'm the author/artist and I want to review Crucible of War - eBook.
Back
Back