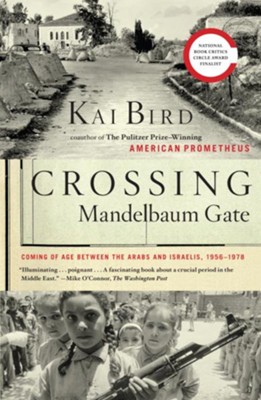 Crossing Mandelbaum Gate: Coming of Age Between the Arabs and Israelis, 1956-1978 - eBook

Weeks before the Suez War of 1956, four-year-old Kai Bird, son of a garrulous, charming American Foreign Service officer, moved to Jerusalem with his family. They settled in a small house, where young Kai could hear church bells and the Muslim call to prayer and watch as donkeys and camels competed with cars for space on the narrow streets. Each day on his way to school, Kai was driven through Mandelbaum Gate, where armed soldiers guarded the line separating Israeli-controlled West Jerusalem from Arab-controlled East. He had a front-seat view to both sides of a divided city—and the roots of the widening conflict between Arabs and Israelis.

Bird would spend much of his life crossing such lines—as a child in Jerusalem, Saudi Arabia, and Egypt, and later, as a young man in Lebanon. Crossing Mandelbaum Gate is his compelling personal history of growing up an American in the midst of three major wars and three turbulent decades in the Middle East. The Zelig-like Bird brings readers into such conflicts as the Suez War, the Six Day War of 1967, and the Black September hijackings in 1970 that triggered the Jordanian civil war. Bird vividly portrays such emblematic figures as the erudite George Antonius, author of The Arab Awakening; Jordan’s King Hussein; the Palestinian hijacker Leila Khaled; Salem bin Laden, Osama’s older brother and a family friend; Saudi King Faisal; President Nasser of Egypt; and Hillel Kook, the forgotten rescuer of more than 100,000 Jews during World War II.

Bird, his parents sympathetic to Palestinian self-determination and his wife the daughter of two Holocaust survivors, has written a masterful and highly accessible book—at once a vivid chronicle of a life spent between cultures as well as a consummate history of a region in turmoil. It is an indispensable addition to the literature on the modern Middle East.

▼▲
Kai Bird is the co-author with Martin J. Sherwin of the Pulitzer Prize-winning biography, American Prometheus: The Triumph and Tragedy of J. Robert Oppenheimer (2005), which also won the National Book Critics Circle Award for Biography. His other books include The Chairman: John J. McCloy, the Making of the American Establishment (1992) and The Color of Truth: McGeorge Bundy & William Bundy, Brothers in Arms (1998). Bird’s many honors include fellowships from the Guggenheim Foundation, the MacArthur Foundation, the German Marshall Fund, and the Rockefeller Foundation. A contributing editor of The Nation, he lives in Kathmandu, Nepal, with his wife and son.

▼▲
Bird, Pulitzer Prizewinning coauthor of American Prometheus, offers a compelling hybrid of memoir and history, weaving together recollections of his childhood in Israel, Saudi Arabia, and Egypt; the stories of his wifes Holocaust survivor parents; and rigorous scholarship on the region. The books titlesalMandelbaum Gate once separated Israeli-controlled Western Jerusalem from the Jordanian-controlled Eastindicates a view on the conflict, and its certainly that, but its also much more: readers are given ringside seats to Cairo under Nasser, the authors American familys friends (including Osama bin Ladens elder brother), and Birds years in India and the U.S. during the heyday of the antiwar movement of the 60s. Notable events and figures (airplane hijacker Leila Khaled, for example, or the Palestinian-Jordanian battles known as Black September) are given detailed treatment and their continuing resonance is made clear. Birds brushes with historyhis first girlfriend was held hostage on an airplane hijacked to win Khaleds release, for instancebrings home the deeply messy humanity of the stories he binds together in this kaleidoscopic and captivating book. (Apr.) Copyright 2010 Reed Business Information.

▼▲
“Engaging and insightful… Crossing Mandelbaum Gate is a compelling corrective that can force even reluctant readers to look at the Middle East anew…. A powerful and unflinching book.”—James Gibney, The American Scholar
“Acute and engaging… Bird puts me somewhat in mind of Edward Said’s memoir, Out of Place…. Bird devotes the last third of his text to a reconstruction of his Austrian Jewish wife’s family history during and after the Shoah. His intention here is as admirable as it is plain, and these pages contain some stirring and even uplifting material about human survival. But this serves only to make his genuine evenhandedness more poignant.”—Christopher Hitchens, The Atlantic

▼▲
I'm the author/artist and I want to review Crossing Mandelbaum Gate: Coming of Age Between the Arabs and Israelis, 1956-1978 - eBook.
Back
Back