Skip to main content
The Case for a Creator Study Guide Revised Edition: Investigating the Scientific Evidence That Points Toward God - eBook
By: Lee Strobel
Stock No: WW48772EB 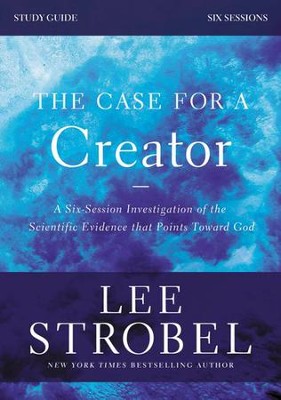 The Case for a Creator Study Guide Revised Edition: Investigating the Scientific Evidence That Points Toward God - eBook

This revised six-session video-based small group study invites you to join bestselling author Lee Strobel in reexamining the theories that once led him away from God. It answers tough questions about creation, evolution, biology, astronomy, and more. This guide features video notes, group discussion questions, informative quotes, and between-session questions for reflection and application.

"My road to atheism was paved by science&hellip; but, ironically, so was my later journey to God."

Former atheist Lee Strobel has discovered that science, far from being the enemy of faith, now provides a solid foundation for belief in God. New scientific discoveries point to the incredible complexity of our universe, a complexity best explained by the existence of a Creator.

This revised six-session study (DVD/digital video) invites participants to encounter this evidence delivered in a compelling conversational style. Join Strobel in reexamining the theories that once led him away from God. Pastors, small group leaders, and individuals seeking resources that answer tough questions about the existence of God will find compelling answers in the Case for a Creator study.

Atheist-turned-Christian Lee Strobel, former award-winning legal editor of The Chicago Tribune, is a New York Times bestselling author of more than forty books and curricula that have sold fourteen million copies. He was described in the Washington Post as "one of the evangelical community’s most popular apologists." He currently leads the Lee Strobel Center for Evangelism and Applied Apologetics at Colorado Christian University. He and Leslie have been married forty-eight years. Visit him at LeeStrobel.com.

As Willow Creek Community Church's key evangelism leader for over sixteen years, Garry Poole is the innovator of seeker small groups and a strategist of creative outreach initiatives. Passionate about reaching people for Christ, Garry and his team have trained thousands of leaders to launch seeker small groups in their own settings. His award-winning book, Seeker Small Groups, provides a detailed blueprint for facilitating small group discussions that assist spiritual seekers with investigating Christianity. He also wrote The Complete Book of Questions, a collection of 1001 conversation starters and numerous group study guides including The Three Habits of Highly Contagious Christians; The Tough Questions Series, and Experiencing the Passion of Jesus (with Lee Strobel) to accompany Mel Gibson’s film, The Passion of the Christ. In 2005, it became the first discussion guide ever to receive the prestigious Charles “Kip” Jordon Christian Book of the Year award. Garry lives in suburban Chicago.

▼▲
Strobel, whose apologetics titles The Case for Christ and The Case for Faith have enjoyed strong popularity among evangelicals, approaches creation/evolution issues in the same simple and energetic style. The format will be familiar to readers of previous Case books: Strobel visits with scholars and researchers and works each interview into a topical outline. Although Strobel does not interview any "hostile" witnesses, he exposes readers to the work of some major origins researchers (including Jonathan Wells, Stephen Meyer and Michael Behe) and theistic philosophers (including William Lane Craig and J. P. Moreland). Strobel claims no expertise in science or metaphysics, but as an interviewer he makes this an asset, prodding his sources to translate jargon and provide illustrations for their arguments. At times, the interview format loses momentum as seams begin to show between interview recordings, rewrites, research notes and details imported from his subjects' CVs (here, Strobel's efforts at buffing his subjects' smart-guy credentials can become a little too intense). The most curious feature of the book-not uncommon in the origins literature but unusual in a work of Christian apologetics-is that biblical narratives and images of creation, and the significance of creation for Christian theology, receive such brief mention. Still, this solid introduction to the most important topics in origins debates is highly accessible and packs a good argumentative punch. Forecast: Strobel's books The Case for Christ and The Case for Faith won Gold Medallion awards and sold into the seven figures. This month, also watch for his The Case for Easter to argue for the historical authenticity of the Resurrection Copyright 2004 Publishers Weekly

This eBook has the same content as CBD stock number WW699597. However, the content will be different from the participants guide.

▼▲
I'm the author/artist and I want to review The Case for a Creator Study Guide Revised Edition: Investigating the Scientific Evidence That Points Toward God - eBook.
Back
Back