Creation & the Courts: Eighty Years of Conflict in the Classroom and the Courtroom
By: Norman L. Geisler 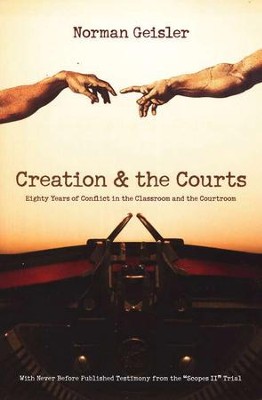 Creation & the Courts: Eighty Years of Conflict in the Classroom and the Courtroom

▼▲
The Scopes "Monkey" trial set a precedent that allows school to teach evolution and refuse to teach Intelligent Design. In this remarkable book, Norman Geisler challenges Christians to recognize the erosion of Christian influence in the public schools and to take part in the battle for creationism in the classroom.

Norman L. Geisler (1932–2019) cofounded Southern Evangelical Seminary and wrote over 100 books, including his four-volume Systematic Theology. He taught at the university and graduate level for nearly forty years and spoke at conferences worldwide.

▼▲
The explosion of the intelligent design movement has ignited a firestorm of controversy in the long-simmering debate between creationism and evolution---especially in America's classrooms. Drawing on never-before-released court transcripts, Geisler offers a compelling assessment of the erosion of Christian influence in our public schools and equips you to take part in the battle. 352 pages, softcover from Crossway Books.

▼▲
Dr. Norman Geislers new book from Crossway, Creation & the Courts: Eighty Years of Conflict in the classroom and the Courtroom, is an extensive look at the court decisions over the past eighty years regarding the teaching of creation science in the public schools. Dr. Geisler, currently professor of Theology and Apologetics at Southern Evangelical Seminary, is widely known for his writing in the fields of philosophy and apologetics.

Beginning with the infamous Scopes trial in 1925 and concluding with the most recent Dover case in 2005, Dr. Geisler provides readers with an overview of five court cases. Setting the stage for the cases to come, he devotes the first part of the book to the Scopes trial followed by a quick review of the 1968 Epperson v. Arkansas Supreme Court ruling.

The next and most substantial section of the book is devoted to the 1982 McLean v. Arkansas Board of Education trial, which became known as Scopes II. As an expert witness during the McLean trial, Dr. Geisler writes from firsthand knowledge about the court proceedings in that case. The final two cases he discusses are Edwards v. Aguillard (1987) and Kitzmiller v. Dover Area School District (2005).

Through his review of these five cases, Dr. Geisler shows that since the Scopes trial, weve come full circle. Its now the evolutionists and not the creationists who are trying to deny schoolchildren the right to hear the scientific evidence on both sides of the evolution/creation debate. And the courts have ruled consistently in their favor.

Creation & the Courts also includes six appendices that include media coverage of the McLean trial, a transcription of Dr. Geislers testimony in the McLean trial, a review of the Webster case, and a discussion of the two competing views about origins.

Creation & the Courts is not an easy book to read since much of it consists of court transcripts, legal arguments, and judicial rulings. It is, however, an important book to read, especially for Christian parents whose children attend public schools. Creation & the Courts will help parents understand where the legal battle lines have been drawn with regard to the teaching of human origins and will enable them to make better-informed decisions about their childrens educations.

▼▲
I'm the author/artist and I want to review Creation & the Courts: Eighty Years of Conflict in the Classroom and the Courtroom.
Back
×
Back
×