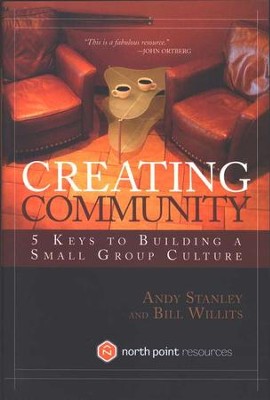 ▼▲
Tag along on the amazing journey of Stanley and Willits, as they develop a thriving small-group culture at Georgia's 16,000-member North Point Community Church. You'll share in five key discoveries that help them connect almost 8,000 people through small groups. Learn why 21st-century folks crave relationships---and how the body of Christ can respond! 224 pages, hardcover from Multnomah.

Small groups are the key to impacting lives in your church. But a healthy small-group environment doesn’t just happen. So pull up a chair. Let’s talk about how to make it happen.

Bill Willits and bestselling author Andy Stanley share their successful approach, which has resulted in nearly eight thousand adults becoming involved in small groups at North Point Community Church in Atlanta. Simply put, the five principles have passed the test. This is not just another book about community; this is a book about strategy—strategy that builds a small group culture. Creating Community shares clear and simple principles to help people connect into meaningful relationships. The kind that God desires for each of us and that He uses to change our lives. Put this proven method to work in your ministry and enjoy the tangible results—God’s people doing life TOGETHER.

"The small-group program at North Point Community Church is not an appendage; it is not a program we tacked on to an existing structure. It is part of our lifestyle. We think groups. We organize groups. We are driven by groups. Creating Community contains our blueprint for success. And I believe it has the potential power to revolutionize your own small-group ministry!" — Andy Stanley

▼▲
Andy Stanley is a communicator, author, and pastor, and he is the founder of Atlanta-based North Point Ministries, which consists of eight churches in the Atlanta area and a network of nearly one hundred churches around the globe. As the host of Your Move with Andy Stanley—a show that delivers more than 10.5 million messages each month—and the author of more than twenty books, he is considered one of the most influential pastors in America. Andy and his wife, Sandra, have three grown children and live near Atlanta.

Bill Willits is the executive director of Adult Ministry Environments for North Point Ministries and one of its founding staff members. A graduate of Dallas Theological Seminary, he and his team have connected more than fifty thousand adults into small groups. Bill and his wife, Terry, have one daughter and one granddaughter.

▼▲
I'm the author/artist and I want to review Creating Community: 5 Keys to Building a Small-Group Culture.
Back
Back