Skip to main content
THE MEGA CHRISTMAS SALE: Save up to 85% off through 10/19 >
Re-Create: Building a Culture in Your Home Stronger Than The Culture Deceiving Your Kids - eBook
By: Ron Luce, Jack Hayford, Samuel Rodriguez
Stock No: WW66927EB 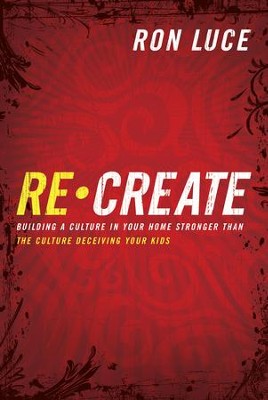 Re-Create: Building a Culture in Your Home Stronger Than The Culture Deceiving Your Kids - eBook

▼▲
An intense battle is raging for the hearts and minds of America's 33 million teenagers, the largest generation of teens in U.S. history. These teens have an enemy. He has crafted an offensive strategy, stealth tactics, sophisticated reconnaissance, and subtle propaganda. You only have to turn on your TV, talk to your teen's friends, go to the movies, or listen to the radio to catch a glimpse of his destructive campaign. Ron Luce is sounding the battle cry, calling parents and Christian leaders to wake up to the war against America's teens. Are you willing to reject "quiet Christianity" and make a world-shaking difference by dreaming new dreams to recreate our culture? Now is the time to use your God-given creativity and claim this generation for Christ, because a generation that the world cannot change is a generation that can change the world!

▼▲
Ron Luce and his wife, Katie, founded Teen Mania in 1986. Today Ron serves as president of the ministry, rallying teens who pack arenas and stadiums for events called Acquire the Fire. Teens also come to the 472-acre headquarters in Garden Valley, Texas for leadership internships and to attend the ministry's academy. Ron holds a bachelor's degree in theology and psychology and a master's degree in counseling. He has written more than thirty books, including ReCreate: Building a Culture in Your Home Stronger that the Culture Deceiving Your Kids and Friends Without Benefits: What Teens Need to Know About a Great Sex Life. Ron and Katie have three teen and young-adult children.

▼▲
I'm the author/artist and I want to review Re-Create: Building a Culture in Your Home Stronger Than The Culture Deceiving Your Kids - eBook.
Back
Back