Shipment delay - click here for more details
Crashing into the Third Heaven: A Thorn in the Flesh - eBook
By: Janis Baker 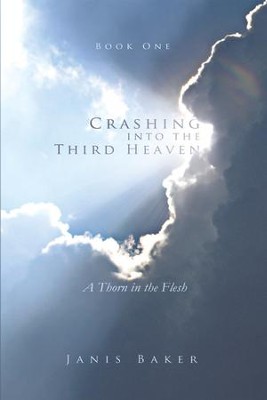 Crashing into the Third Heaven: A Thorn in the Flesh - eBook

Two ten-year-old Irish American girls take the reader on a journey beginning in 1955, when they are challenged by Salvie Baldwin to learn about the historic 1954 US Supreme Court decision declaring segregated schools unconstitutional.

After a tragic fall on a track field, sixteen-year-old Erin O'Hara is told that she must make a life-or-death decision to have surgery to save her left leg and her life. Desperately ill and weary from the fight to hang on, she thinks of what she and her best friend, Lily McCarey, have learned about the courage of the Negroes in fighting for fair independence and acceptance, as they are in the middle of America's civil rights movement. They have both been clinging to that shifty rope bridge called faith. It is now 1963 and the worst is yet to come.

Joy O'Hara, Erin's mother, keeps her ambitious husband and three daughters within her sight, delivering unconditional love. In her wisdom, she hires Mayleen Watson, a good woman, to look after her children and her home. But her true intent is to help her racially prejudiced husband move to a place of honest acceptance, while keeping her children colorblind. Mayleen, who swore she would never work for a white family, takes them into her heart and, when necessary, delivers tough love through sass and laughter. While representing Colorado in the 1963 America's Junior Miss Pageant, Erin's beliefs are sorely tested but reinforced by divine miracles. As life spins ahead, it is discovered that deeply held faith in God is the bedrock of everyone's salvation.

Crashing into the Third Heaven is a testament to the power of faith, courage, and forgiveness. First-time novelist Janis Baker lays down a foundation of strong, believable characters who exemplify the capabilities of women while under fire.

▼▲
I'm the author/artist and I want to review Crashing into the Third Heaven: A Thorn in the Flesh - eBook.
Back
×
Back
×