Courageous: 10 Strategies for Thriving in a Hostile World
By: Dr. Robert Jeffress 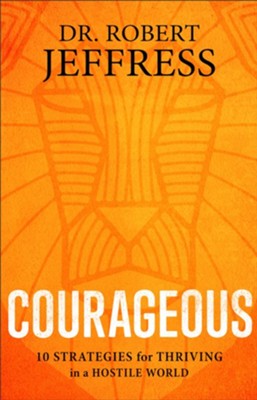 Courageous: 10 Strategies for Thriving in a Hostile World

▼▲
In the virulent environment of our secular culture, Christians often face relentless attacks. How can we survive---and thrive? Offering fresh fire and new hope, Jeffress shares 10 specific strategies for overcoming threatening situations. Discover how to take inventory, develop a victorious mindset, trust your training, learn from the past, help others, and more. 264 pages, hardcover from Baker.

▼▲
Christians face relentless attacks from an ungodly culture, a formidable adversary, and our own fallen natures. Yet we cannot afford to surrender to these very real enemies.
Just as survivalists use 10 specific strategies to overcome threatening situations, Courageous explains 10 biblical strategies for surviving--and thriving--in a world that is hostile to our faith. As A.W. Tozer said, "A scared world needs a fearless church." Courageous is a clarion call for Christians to boldly live out their faith.

If you've felt your faith is under attack, if you're struggling with the temptation to follow the crowd despite biblical teaching to the contrary, or if you're just feeling weary, the 10 strategies in Courageous will provide fresh fire and new hope.

▼▲
Dr. Robert Jeffress is senior pastor of the 14,000-member First Baptist Church in Dallas, Texas, and is a Fox News contributor. His daily radio program, Pathway to Victory, is heard on more than 900 stations nationwide, and his weekly television program is seen on thousands of cable systems and stations in the United States and in 195 countries around the world. Known for his bold, biblical stands on cultural issues, Jeffress has been interviewed on more than 3,000 radio and TV programs, including Good Morning America, CBS This Morning, Fox & Friends, MSNBC, CNN, Real Time with Bill Maher, and Hardball with Chris Matthews. He is the author of Not All Roads Lead to Heaven, A Place Called Heaven, and Choosing the Extraordinary Life. He lives in Dallas.

▼▲
I'm the author/artist and I want to review Courageous: 10 Strategies for Thriving in a Hostile World.
Back
×
Back
×