Skip to main content
MOTHER'S DAY SALE: Books, Bibles, and more at no-nonsense prices through April 20th. >
Courage to Soar: A Body in Motion, a Life in Balance
By: Simone Biles, Michelle Burford
Stock No: WW759669 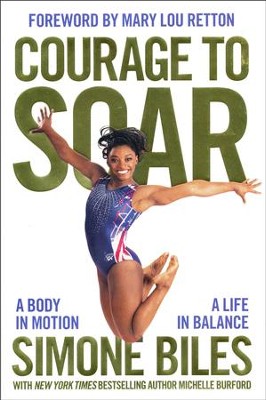 Courage to Soar: A Body in Motion, a Life in Balance

▼▲
Simone Biles' entrance into the world of gymnastics may have started on a daycare field trip in her hometown of Spring, Texas, but her God-given talent, passion, and perseverance have made her into one of the top gymnasts in the world-as well as a strong contender for the Olympic gold in Rio de Janeiro. In her own words, Simone recounts the events, challenges, and trials that have carried her from an early childhood in foster care to a coveted spot on the 2016 Olympic team. Along that path, Simone has garnered fourteen world medals, ten of them gold. Therefore she has the most World Championship gold medals of any female gymnast, and she is the most decorated U.S. female gymnast in World Championship history. Through years of hard work and determination, Simone has relied on her faith and family to stay focused and positive, while having fun competing at the highest level and doing what she loves. For the first time, Simone shares her inspiring personal story-one filled with daily acts of courage and unlikely dreams.

New York Times bestselling author Simone Biles is a four-time Olympic gold medalist and a three-time World all-around gymnastics champion. In 2015 at the World Championships in Glasgow, Scotland, she became the only female gymnast to ever win three consecutive all-around titles. She is also the most decorated American female gymnast, with a total of nineteen medals, fourteen of them gold. Simone, who was born in Ohio and later adopted by her grandparents in Texas, began her training at age 6. During a serendipitous day care field trip to Bannon’s Gymnastix, a coach recognized Simone’s natural talent and sent home a letter to her parents, requesting that they enroll her in a class. Simone rose quickly through the sport’s levels, and in 2011, she began her junior elite career at the American Classics in Huntsville, Texas, where she placed third all-around. Amid a few setbacks in the following two seasons, Simone rebounded in 2013 to claim the first of her three all-around World Championship titles. With her strong faith in God and her triumph against the odds, Simone is inspiring millions to dream big and follow their hearts.

Michelle Burford is a #1 New York Times bestselling collaborative writer and a founding editor of O, The Oprah Magazine. She is a Harvard-trained journalist whose work has taken her to more than 35 countries on six continents. A native of Phoenix, Michelle now resides in New York City. Visit her online at www.MichelleBurford.com

▼▲
Nineteen-year-old Biles, Olympic gold medalist and the most decorated U.S. gymnast of all time, takes readers along her journey to the podium in this memoir. After spending her early childhood in and out of foster care, Biles was adopted by her biological grandparents. She began her gymnastics training at the age of six after a field trip to Bannon’s Gymnastix, where the coaches quickly discovered that she “had what it took to go all the way.” Biles describes not only her gymnastics training and career but also her personal life, including her grandmother’s death, the difficult decisions she made in order to balance school and gymnastics, her “bratty period” in her early teens, and her love for her car, with its zebra-print interior. In recent years, Biles has won three consecutive world championship titles followed by her team gold and individual wins at the 2016 Olympics. Biles’s narration is effervescent, showing her to be, as her brother says, “a goofy and down-to-earth kid.” The tone is conversational and includes casual phrases such as “if you can’t already tell” and “just kidding.” She expresses appreciation for her family, friends, teammates, and coaches and frequently credits God and her faith for her success. One slight caveat: readers without background knowledge about gymnastics may not find the terminology to be adequately explained. VERDICT Essential for libraries serving tween and teen gymnastics fans.–Magdalena Teske, Naperville Public Library, IL
Who can forget the radiant smile and inexhaustible energy of four-feet-eight, 19-year-old Simone Biles, Olympian gymnast? This inspiring and humorous memoir details how Simone, with the help and support of her family, coaches, faith, and friends, succeeded in winning five Olympic medals in 2016, four gold and a bronze. After a brief time in foster care, Simone was six when she and her younger sister were adopted by her grandparents (whom she refers to as her mom and dad). Flipping on the family trampoline and an unexpected daycare trip to the local tumbling gym sparked her love of gymnastics. Despite her rookie success, she missed being selected for the USA women’s junior team by one spot and was too young to compete in the 2012 Olympics. But success was in her future, due in part to her incredible support system---her parents even built their own gym. Simone is admirable, but it’s the unwavering support of her family and coaches that will make a lasting impact on readers. -Sharon Rawlins

▼▲
I'm the author/artist and I want to review Courage to Soar: A Body in Motion, a Life in Balance.
Back
×
Back
×