A Country of Our Own, A: A Novel of the Confederate Raiders
By: David Poyer 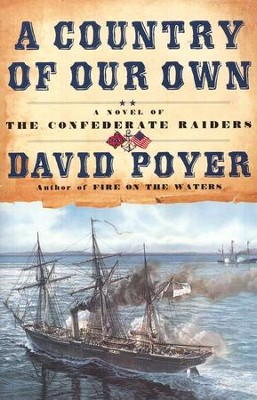 A Country of Our Own, A: A Novel of the Confederate Raiders

▼▲
We first met Lt. Ker Custis Claiborne, formerly of the United States Navy, in Fire on the Waters. Claiborne is no admirer of slavery. But he's a Virginian, joining the fledgling Confederate States Navy in 1861. After fighting along the Potomac with the Army of Virginia, Ker and his mentor, Captain Parker Trezevant, burn, sink, and destroy across the Caribbean to undermine the Union and force a truce favorable to the Confederacy.
But when their first cruiser proves too slow and small, Ker joins Commander James Bullock in London to buy or build a ship of war that can sweep Yankee commerce from the seas. A daring coup puts Ker in command of the most dangerous raider ever to range from Brazil to Boston, but the bloodiest battle is yet to come -- a confrontation between the ex-opium clipper C.S.S. Maryland and the Union cruiser that has trailed her across a quarter of the world.
A Country of Our Own is historical sea fiction at its best -- authentic, engrossing, and masterfully paced -- from the master sea-yarner The New York Times Book Review says "knows what he is writing about when it comes to anything on, above, or below the water."

▼▲
"Poyer's determination to present a complex, historically accurate sea yarn is impressive....Sailing enthusiasts will be in their element."
-- Publishers Weekly
"Will receive -- and deserves -- a warm welcome from the C. S. Forester/Patrick O'Brian audience."
-- Kirkus Reviews
"If you have any love for ships or the sea, Poyer's narrative reads, as the critics say, as well as Conrad, Melville, and Wouk."
-- The Norfolk Virginian-Pilot

▼▲
I'm the author/artist and I want to review A Country of Our Own, A: A Novel of the Confederate Raiders.
Back
×
Back
×