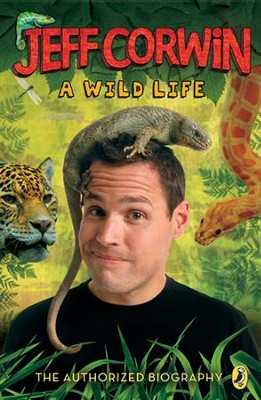 ▼▲
A fascinating look at the real Jeff Corwin!

From growing up in an urban community near Boston, to falling in love with snakes, to traveling to exotic places, to becoming a beloved Emmy Award-winning television host of Animal Planet, this authorized biography will give readers a first-hand look at Jeff's amazing and adventurous life. Based on extensive research and one-on-one interviews with Jeff, kids will get an honest telling of Jeff Corwin's incredible journey from child nature enthusiast to naturalist and animal specialist.

▼▲
Jeff Corwin is the host of a variety of popular television shows, including Animal Planet's Jeff Corwin Experience, Corwin's Quest, Spring Watch, and King of the Jungle; Disney's Going Wild with Jeff Corwin; Investigation Earth with the Discovery Networks; NBC's Jeff Corwin Unleashed, which won an Emmy for an Outstanding Host; and the Travel Channel's Into Alaska and Into the American West. He also co-created and cohosted CNN's Planet in Peril with Anderson Cooper in 2007. In the fall of 2008, Jeff Corwin was named Ambassador of Climate Change for one of the nation's leading conservation organization, Defenders of Wildlife. When not traveling the world, Jeff can be found at his home off the coast of Massachusetts, where he lives with his wife and two daughters.

▼▲
I'm the author/artist and I want to review Jeff Corwin: A Wild Life: The Authorized Biography - eBook.
Back
×
Back
×