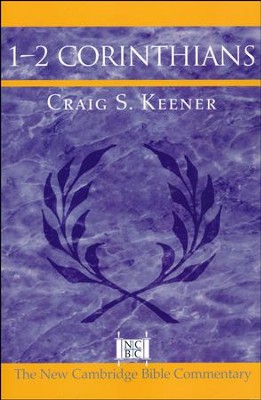 ▼▲
This commentary explains 1 and 2 Corinthians passage by passage, following Paul's argument. It uses a variety of ancient sources to show how Paul's argument would have made sense to first-century readers, drawing from ancient letter-writing, speaking, and social conventions. The commentary will be of interest to pastors, teachers, and others who read Paul's letters because of its readability, firm grasp of the background and scholarship on the Corinthian correspondence, and its sensitivity to the sorts of questions asked by those wishing to apply Paul's letters today. It will also be of interest to scholars because of its exploration of ancient sources, often providing sources not previously cited in commentaries.

▼▲
Despite his special pastoral relationship with the church in Corinth, Paul confronted numerous local and cultural problems needing to be addressed. Utilizing a range of ancient sources, Craig Keener explains these problems and how Paul's arguments would have been communicated to a first-century audience. This commentary analyzes 1 and 2 Corinthians passage by passage, in accordance with Paul's argument, and draws from ancient letter-writing, speaking and social conventions to demonstrate how meaningful to first-century readers it would have been. The commentary will interest pastors, teachers, and scholars because of its exploration of ancient sources, often not previously cited in commentaries.

▼▲
I'm the author/artist and I want to review 1 & 2 Corinthians: The New Cambridge Bible Commentary.
Back
Back