EARLY CHRISTMAS SALE: Shop over 900 items up to 85% off through 9/29 >
Coptic Monasteries: Art and Architecture of Early Christian Egypt
By: Gawdat Gabra 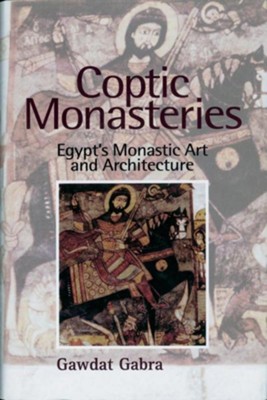 ▼▲
Egypt, the birthplace of communal monasticism, has a rich store of monasteries and monastic art. Coptic Monasteries takes the reader on a tour of the best preserved and most significant of these ancient religious centers, documenting in exhaustive detail the richness and the glory of the Coptic heritage.
An informative introduction by Tim Vivian brings to life the early Christian era, with background information on the origins of the Coptic Church as well as its rites and ceremonies, sketches of some of monasticism's founding figures, and accounts of some of the difficulties they faced, from religious schism to nomadic attacks.
Gawdat Gabra's expert commentary, complemented by almost one hundred full-color photographs of newly restored wall paintings and architectural features, covers monasteries from Aswan to Wadi al-Natrun. Ranging across a thousand years of history, Gabra's observations will make any reader an expert on the composition and content of some of Egypt's most outstanding religious art, the salient architectural features of each monastery, as well as the ongoing process of restoration that has returned much of their original vibrancy to these works.

A unique and invaluable historical record, Coptic Monasteries is equally an in-depth, on-the-spot guide to these living monuments or an armchair trip back in time to the roots of one of the world's oldest Christian traditions.

▼▲
GAWDAT GABRA has been the director of the Coptic Museum in Cairo since 1985 and is the author of several books and numerous articles on Coptic studies. He is the editor of Be Thou There: The Holy Family's Journey in Egypt (AUC Press, 2001).

▼▲
I'm the author/artist and I want to review Coptic Monasteries: Art and Architecture of Early Christian Egypt.
Back
×