Skip to main content
CYBER WEEK SALE: Up to 88% off, thru 12/6. >
The Wise Guy Cookbook: My Favorite Recipes From My Life as a Goodfella to Cooking on the Run - eBook
By: Henry Hill, Priscilla Davis, Nicholas Pileggi
Stock No: WW48079EB 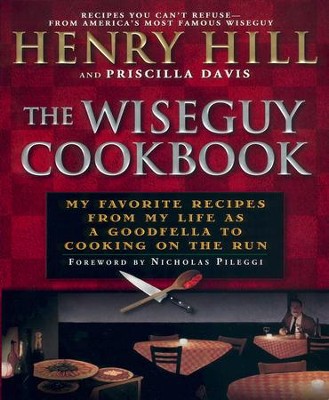 The Wise Guy Cookbook: My Favorite Recipes From My Life as a Goodfella to Cooking on the Run - eBook

▼▲
Now, in his inimitable style, Henry Hill tells some spicy stories of his life in the Mob and shows you how to whip up his favorite dishes, Sicilian style—even when you’re cooking on the run. Learn delicious recipes that make even the toughest tough guy beg for more&hellip;

Henry Hill was a born wiseguy. At the pizzeria where he worked as a kid, he learned to substitute pork for veal in cutlets—which came in handy later when the bankroll was low. At thirteen, he got his first percentage from a local deli—that lost business when he started supplying the neighborhood wiseguys with his own heroes. And what great heroes they were.

Once he entered Witness Protection, though, Hill found himself in places where prosciutto was impossible to get and gravy was something you put on mashed potatoes. So he learned to fake it when necessary (for example, Romano with white pepper took the place of real pecorino-siciliano cheese), and wherever he found himself, Hill managed to keep good Italian food on the table. He still brings this flair for improvisation to his cooking. No recipe is set in stone. And substitutions are listed in case you need them for these recipes and many more:

▼▲
I'm the author/artist and I want to review The Wise Guy Cookbook: My Favorite Recipes From My Life as a Goodfella to Cooking on the Run - eBook.
Back
Back