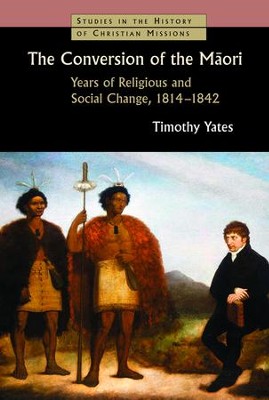 The Conversion of the Maori: Years of Religious and Social Change, 1814-1842

▼▲
* What was the impact of Christianity on the Maori people of New Zealand? Relying on archival research, Yates charts the change in their society and religion and describes the historical development of the conversion process. Explore the methods, goals, successes, and failures of the missionaries who tried to bring Jesus to an entire people. 168 pages, softcover from Eerdmans.

▼▲
The Conversion of the Maori is the latest volume in the Studies in the History of Christian Missions series, which explores the significant, yet often contested, impact of Christian missions around the world.

Timothy Yates introduces the history of missions among the Maori people of New Zealand in the mid-1800s. On the basis of painstaking archival research, Yates charts the change in society and religion over the course of nearly thirty years in detail, describing the historical development of the conversion process. The Conversion of the Maori is ecumenical and historically informed to give a balanced presentation of the conversion of a whole people.

▼▲
Timothy Yates is docent in mission studies at the University of Uppsala, Sweden, an Honorary Fellow of St. John's College, University of Durham, and Canon Emeritus of Derby Cathedral, England. His other books include The Expansion of Christianity and Christian Mission in the Twentieth Century.

▼▲
Missions Today
"Informative, inspiring and invigorating, especially in this age of diminished interest in missionary outreach. As such it is a must read for everyone, especially missionaries and those aspiring to be missionaries."

Journal of Ecclesiastical History
"Yates has provided a nuanced overview of the English Protestant and French Roman Catholic missionaries to the Maori in New Zealand."

Anvil
"A welcome addition to Eerdmans' Study in the History of Christian Missions series, a growing resource for the missiologist and mission historian. . . . This perceptive summary of the missionary contribution has meaning far beyond the New Zealand contexts and it is to be hoped that other scholars will seek to use and to test this important new insight in their own exploration of mission case studies from other parts of the world."

Anglican and Episcopal History
"Timothy Yates' Conversion of the Maori joins the recent move toward synthesis — toward a more complicated, and accurate, understanding of missionary motivation and effort. A docent of mission studies at the University of Uppsala (Sweden), Yates shows us that some missionaries were courageous idealists, and some were misfits looking for a place of power in the world. Some missionaries disliked the people among whom they worked, and some came to admire them. Some missionaries held themselves to the high standards they preached to others, and others, far from home, lived double lives. . . . The Conversion of the Maori is written in straight-forward prose that relies more on reportage than on thoughtful analysis. But this does not mitigate its usefulness as an introduction to what is an inherently interesting story."

Social Sciences & Missions
"In this book Yates has entered, perhaps rather bravely, into a long-running set of debates over the nature of Maori conversion to Christianity in the first half of the nineteenth century. In the process he has made a useful contribution to the basket of knowledge.'"

Charles W. Forman
-- Yale Divinity School
"In this book Timothy Yates throws fresh light on an important, but little known, part of Christian mission history. His work is to be warmly welcomed."

Allan Davidson
-- University of Auckland
"Conversion of the Maori and the impact of missionary Christianity in New Zealand have been matters of considerable debate among historians. Timothy Yates provides a careful analysis of these areas and offers carefully nuanced insights into these complex issues, taking particular note of indigenous initiatives."

▼▲
I'm the author/artist and I want to review The Conversion of the Maori: Years of Religious and Social Change, 1814-1842.
Back