Skip to main content
BIBLE SALE OF THE SEASON: For a Limited Time ~ Save on over 1,100 Bibles!
5 Conversations You Must Have with Your Daughter
By: Vicki Courtney
Stock No: WW446661 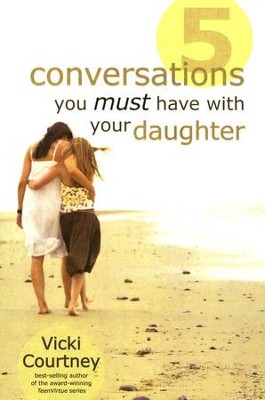 5 Conversations You Must Have with Your Daughter

▼▲
In 5 Conversations You Must Have With Your Daughter, youth culture expert Vicki Courtney gives moms straight talk about keeping the lines of communication open and honest with their daughters from cradle to college. Vicki helps parents pinpoint and prepare the discussions that need to be ongoing so that girls will know the truth about life before they believe the culture's lies. Conversation tips are grouped by age groupings: 5 and under, 6 to 11, and 12 and up. Paperback.

From the cradle to college, tell your daughters the truth about life before they believe the culture’s lies.

For mothers with girls newborn to eighteen, Five Conversations You Must Have with Your Daughter is simply a must-have book. Youth culture commentator Vicki Courtney helps moms pinpoint and prepare the discussions that should be ongoing in their daughters' formative years.

To fully address the dynamic social and spiritual issues and influencers at hand, several chapters are written for each of the conversations, which are:

1. You are more than the sum of your parts

3. Sex is great and worth the wait

4. It’s OK to dream about marriage and motherhood

5. Girls gone wild are a dime a dozen—dare to be virtuous

The book is linked to online bonus features offering invaluable tips on having these conversations across the various stages of development: five and under, six to eleven, twelve and up.

▼▲
Vicki Courtney is a speaker and the best-selling author of many books and Bible studies. Among her popular writings are the ECPA Christian Book Award winners TeenVirtue and TeenVirtue Confidential. Vicki and her husband have three grown children, a son-in-love, a daughter-in-love, and a grandchild. They live in Austin, Texas where they are blessed to have all of their children living nearby. More information can be found at VickiCourtney.com.

Q: 5 Conversations You Must Have With Your Daughter-- What about a father reading it with her ? Acceptable or touchy?

This book is written by and designed to be used by mothers who have daughters (and to some extant sons that need to know how to defend their sisters in Christ). While the original intent is for mothers, after reading the book, it would appear that fathers, who have both wisdom and a strong relationship with their daughters, would be able to utilize the information presented.

As each father and daughter are different including their relationship, a higher level of discernment should be used before engaging with your daughter in these difficult conversations, especially if there is a maternal figure in the daughter's life who could work as a surrogate mother for some of the more involved discussions. Simply put, some of the information will be better received if it comes from a woman who has lived through the situations than a man who has only observed them..

Q: Could my 18 year old benefit from this book? Or did I missed the moment?

It depends on your daughter. Sections of this book are written to older teens and it is recommended for girls up to 18.

Q: my daughters are 10 and 7 would this book help me with their ages?

Yes, this book is divided into specific age groups so you can address each child's needs individually.

▼▲
I'm the author/artist and I want to review 5 Conversations You Must Have with Your Daughter.
Back
Back