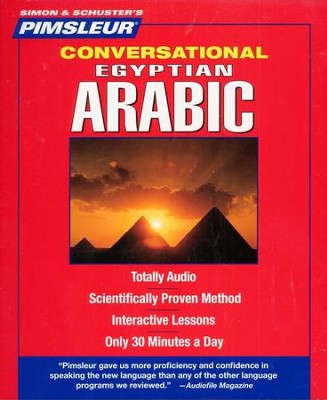 ▼▲
Conversational Arabic includes the first 16 lessons from the Comprehensive Level I with eight hours of interactive audio-only instruction with real-life conversations. The Pimsleur Method gives you quick command of Arabic structure without tedious drills, presenting the whole language as one integrated piece so you can succeed. You'll receive lessons in grammar and vocabulary taught together in every conversation; interactive audio-only instruction and 30-minute lessons designed to optimize the amount of language you can learn in one sitting. This program teaches Egyptian Arabic.

▼▲
Pimsleur® equals success. Just one 30-minute lesson a day gets you speaking and understanding like no other program.

This course includes Lessons 1-16 from the Arabic (Egyptian) Level 1 program - 8 hours of audio-only effective language learning with real-life spoken practice sessions. Each lesson provides 30 minutes of spoken language practice, with an introductory conversation, and new vocabulary and structures. Detailed instructions enable you to understand and participate in the conversation. Practice for vocabulary introduced in previous lessons is included in each lesson. Topics include: greetings, numbers, meals, shopping, telling time, scheduling activities, and asking and giving directions. The emphasis is on pronunciation and comprehension, and on learning to speak Egyptian Arabic.

The Egyptian Arabic Language
Arabic is the world's 6th most common language with 295 million native speakers. It is also the liturgical language of 1.6 billion Muslims as it is the language of the Qur’an the holy book of Islam.
Egyptian Arabic is mainly spoken in urban Egypt. Egyptian Arabic has also gained a high degree of acceptance throughout the Arabic-speaking world because of its use in films. Pimsleur's Egyptian Arabic teaches the Cairene dialect, the prestige dialect spoken in Cairo, Egypt's capital city.

Tech Talk
- CDs are formatted for playing in all CD players, including car players, and users can copy files for use in iTunes or Windows Media Player.

▼▲
Dr. Paul Pimsleur devoted his life to language teaching and testing and was one of the world’s leading experts in applied linguistics. After years of experience and research, Dr. Pimsleur developed The Pimsleur Method based on two key principles:  the Principle of Anticipation and a scientific principle of memory training that he called "Graduated Interval Recall."  This Method has been applied to the many levels and languages of the Pimsleur Programs.

▼▲
"Pimsleur programs provide plenty of positive reinforcement that will keep learners on track, and we found that Pimsleur gave us more proficiency and confidence in speaking the new language than any of the other language programs we reviewed." -- AudioFile Magazine
"EXTREMELY ACCESSIBLE...each section within the lessons is short enough to hold our attention, and there is enough repetition to teach even those who consider themselves slow learners...Pimsleur [programs] are extremely thorough and easy to use -- quite lively!" -- Boston Herald
"Learn French while commuting, German while jogging, Spanish (or Russian, Italian, and Japanese) while cooking all with NO WRITTEN MATERIALS!" -- New York Daily News
"Designed for the ear and not the eye...the lessons provide PERFECT 30-minute bites of work." -- St Louis Post-Dispatch
"Learn to habla español or parlez français before your next trip aboard. The interactive LESSONS CHALLENGE STUDENTS to use new words in conversation instead of memorize them." -- American Way (American Airlines inflight magazine)
"I tried other language programs with little success...This is the best by far!" -- Pamela A. Mitchell, Pilot, International Society of Women Airline Pilots

▼▲
I'm the author/artist and I want to review Conversational Arabic (Egyptian) 16 Lessons, 8 CDS.
Back
Back