Skip to main content
For a Continuing Church: The Roots of the Presbyterian Church in America
By: Sean Michael Lucas
Stock No: WW951065 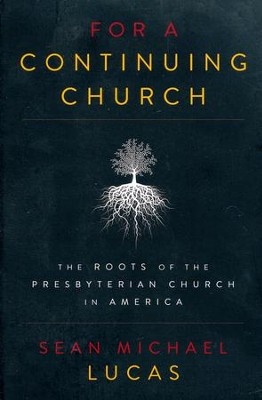 For a Continuing Church: The Roots of the Presbyterian Church in America

▼▲
The Presbyterian Church in America (PCA) is the largest conservative, evangelical Presbyterian denomination in North America. And yet ministers, elders, and laypeople know only the barest facts concerning the denomination's founding. For a Continuing Church is a fully researched, scholarly yet accessible account of the theological and social forces that brought about the PCA.

Drawing on little used archival sources, as well as Presbyterian newspapers and magazines, Lucas charts the formation of conservative dissent in response to the young progressive leadership that emerged in the Presbyterian Church in the United States (PCUS) in the 1920s and 1930s. Their vision was to purify the PCUS from these progressive theological elements and return it to its spiritual heartland: evangelism and missions. Only as the church declared the gospel with confidence in the inspired Scriptures would America know social transformation.

Forty years after its founding, the PCA has nearly 400,000 members and is still growing in the United States and internationally. For a Continuting Church paints the story of the history of this body of churches.

▼▲
As God did a glorious work in the lives of his imperfect but beloved covenant people, he would at times tell them to 'pile up some stones' in order to remember what he had done and to teach the 'coming generations.' Sean Lucas has 'piled up some stones' to prod our remembrance of the gracious work of God's providence in establishing the Presbyterian Church in America. And the 'coming generations' are therefore sure to be both encouraged and equipped for a future that by God's grace will be marked with an imperfect yet loving obedience.
-Harry L. Reeder III,
Senior Pastor, Briarwood Presbyterian Church, Birmingham, Alabama

With For a Continuing Church, Sean Michael Lucas has remedied the neglect that southern Presbyterians have generally suffered at the hands of church historians. His story of conservatives in the Presbyterian Church in the United States follows carefully the Old School tradition as it developed and adapted to twentieth-century life, and then informed the founding of the Presbyterian Church in America. If history teaches lessons, Lucas's book has at least a semester's worth for both those who belong to the PCA and others who desire to promote and maintain the witness of Reformed Protestantism.
-D. G. Hart,
author of Calvinism: A History

Don' let the title fool you. This is about far more than the PCA. This book is nothing less than a history of Presbyterianism in the twentieth century - with all its theological wrangling, all its political maneuvering, all its failings, and all its faithfulness. This is certainly a story worth telling, and Sean tells it very well.
-Kevin DeYoung,
Senior Pastor, University Reformed Church, East Lansing, Michigan

▼▲
I'm the author/artist and I want to review For a Continuing Church: The Roots of the Presbyterian Church in America.
Back
Back